Well loved.  Well worth a dime.

Tony at the Off Hiatus Baseball blog posted a 30 day baseball card "challenge" for bloggers.  I am going to participate because my incoming mail has slowed dramatically and also because it looks fun.   I have to make it my own, as I'm not too into baseball.  I still buy some, but baseball isn't a passion. Instead, I will just make it cards.  Cards of any sport and maybe a non-sport at some point!

This is a great first question.  I've actually commented on blogs over the last couple of weeks or so about a particular photo standing out.  Most images are about the same anymore.  There are definitely exceptions like 2016 Stadium Club but they are not the norm.

A couple of posts that I commented on:
Slow and steady...
Retro Review – 1986 Donruss

If you want a really cool one that wasn't obvious at the time, but is now, you should check this one out (on a side note, I really want this card if anyone has one to spare):
Patrick Kane’s “First” Hockey Card

Now that I've promoted some others' blogs, it's time for my choice.

Please excuse the crappy phone pic.  I didn't want to take it out of the binder to scan.  It's not that the shot is a great shot of Bobby Ryan.  It's the sign that someone is holding.  I mean, who doesn't love puppies?  If you don't, you're a communist!

I also considered the Jamie Benn card from the set.  If you don't know what it looks like, I think it's worth checking out.

Happy collecting!
Posted by Kin at 12:06 AM No comments:

I always liked this product, but never bought any of it.  Came across a few of them in a dime box and snagged them.  Maybe someday I'll work to put the set together.

If you've been reading my blog, you know that I've decided to change how I collect.  One collection that I have way too much of involved former players from my alma mater, West Virginia University.

My new line of thinking is that I just need one card per player.  However, it's a plan and likely won't pan out quite that way.  I read a blog post on The Greatest 21 Days a couple of weeks ago and it was about a player I didn't know of that played at WVU.  That got me thinking about who else might have played and had a card that I didn't know of.

I was looking for a list of all professional players that also played at WVU.  I finally found it, but first I found a list of former players that made the majors.  Checking out both COMC and eBay, I was pleasantly surprised to find that many of them had cards.

The name "Bucky Guth" stuck out to me because he was the one player that made his debut after 1960 that I didn't already have a card of.  A basic eBay search turned up nothing, but there was a team set that came up.  I clicked it and surprisingly, there was the name.

It was an auction for a minor league set that I knew nothing about from the early 1970s.  I had no idea what to expect it would go off at.  I checked by Beckett Vintage Almanac and couldn't find a listing for the set.  Then I checked the Beckett OPG and found the set, but there are no prices listed for it.  Adding to the...ummmmm...dilemma was that it is listed as Guth's only card and there were no sales listed in eBay history.  How long would it be until this became available again?

I watched" it and got the notification it was 15 minutes from completion while at work.  I went ahead and bid, figuring there was no way I'd win.  When I first saw the auction, there was already a bidder.  It turned out that the other bidder only bid the minimum.  I won it for just a dollar more than the minimum bid.

Guth got just three at-bats in the majors with no hits.  He was a 20th round draft pick and when you add it all together, there was a good chance he may not have had ANY cards.

He played in Tacoma with a name that Twins fans know well, Tom Kelly.  He is in the set and that was the reason I felt the team set might end up going for a price out of my comfort zone.  I'm glad that I was wrong.

Sure, it's marked on.  It was a dime though, so what can you expect?  I wonder if the collector ever completed his or her set.

I was definitely a Jay Buhner fan during the 1990s.  It wasn't to the point that I actively collected his cards, but I was a fan nonetheless.  I will always believe that "Bones" was an underrated part of those mid-late 90s Mariners teams.

TRIVIA:  Who did the Mariners send to the Yankees to acquire Jay Buhner?  Was this the worst trade in Yankees history?

On an unrelated note...did anyone actually peel the covering off the Finest cards?

This is the final post about my latest COMC mailday.  I decided to tie up all the loose ends into one.


I've been listening to the "What Happened When" podcast since the first episode.  I love hearing Tony Schiavone and his stories.  I hope to find an address at some point so that I can send these cards to be signed.
I recently heard Jim Neidhart on Chris Jericho's podcast.  I'm also hoping to find an address to get this signed.
A couple of months ago I was making good progress on scanning and cataloging my Russ Davis collection.  I need to get it all together so I can start looking for the pieces I need and get this as close to complete as possible.  So many projects, so little time.

"Grover" was the manager of the Indians during the golden days of my youth.  I want to get these signed TTM.  I always loved the Topps All-Star Rookie trophies on cards. 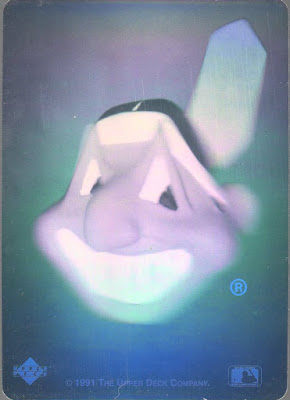 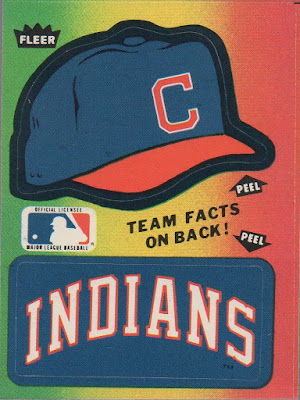 The Indians hologram and sticker were picked up just in case I need them to have a former player sign and I don't have a card at the time. 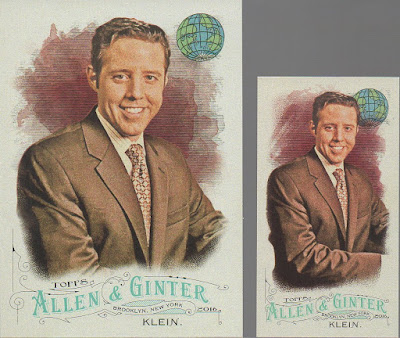 I picked up the Rick Klein cards to send to him for signing.  After I bought these I picked up a few on Sportlots.  The TTM success took about a week.
I end the COMC mailday with a card for my West Virginia Mountaineers collection.  I'm not collecting football anymore (other than vintage) and this card fits perfectly into the one-card-per-player project I'm working on.

Happy collecting!
Posted by Kin at 12:05 AM No comments:

Whoever C.K. was, he or she made sure that anyone that looked at this card knew it was theirs.  I guess that's why it was in the dime box.

When I first started collecting in 1987 my parents bought me boxes of cards from time to time.  As time went on, prices rose and I started buying my own cards.  I was never one to save for a box of cards, but I remember 1997 Bowman being my first "big" box purchase.  I was hoping to get that Hideki Irabu card!  I didn't...and neither did his career.

The other "big" card was Jose Cruz, Jr.  I did get one of those.  I also got a Kris Benson and living an hour south of Pittsburgh, it was a good card to have.  I despised Benson, though.  Why?  I remember the West Virginia baseball team having to play Clemson in a best-of-three series to get to the College World Series.  Clemson's top two pitchers were Benson and Billy Koch.  Needless to say, Clemson ended the series in two games.  That is what I will always remember Benson for.

Since I only paid a dime for this card, I might set it ablaze.  Probably with the Ryan Kalish cards I purchased for the same reason.

A week ago, Matt at the (new) blog Summer of '74 posted, looking to make some trades.  The concept was simple.  Claim something you want, he sends it, you send some things back that he's looking for.  Easy enough.

My PWE showed up a couple of days later with some vintage goodness.  The cards don't fit any particular part of my collection, but I'm sending him modern for vintage.  That's a win in my eyes.


Thanks for the trade, Matt!  Your cards will be out soon.

I didn't notice the water damage to the card or I might not have bought it.  It was from a dime box so maybe I would have.

Back to back days with dime box former Pirates catchers.  I was a catcher in little league and I'd be lying if I denied ever trying the weird Tony Pena leg-out-to-the-side stance behind the plate.

By the way, is the air in Buffalo thin like in Colorado or something?  (See stats on back)

A couple of days I posted about the Young Guns cards that came in my latest COMC mailday.  These take a backseat to nothing, but here are the rest of them.


First things first, my scans do the beauty of these cards no justice.  Upper Deck did a fantastic job with them.

I spent a lot of time on ePack for awhile and enjoyed it.  The three Blackhawks cards I "built" myself.  After I saw how cheaply a lot of them were selling for on COMC, I decided against putting in the time and effort.  I bought most of the other Blackhawks (I haven't had them shipped yet) and also the Klingberg.

It's a bit disconcerting that the "top" level cards from series 1 are more abundant and cheaper than the ones from Compendium.  But what can you do?

I'm really happy to see the numbers that Ryan Hartman is pretty quietly putting up for the Blackhawks this season.  I also take joy in seeing the kids that grew up in Chicago (see also: Scott Darling) thriving with the team.  It's definitely a throwback in many ways and you have the think that it's extremely special for a Chicago kid.  He has to much prefer being a Blackhawk to a Canadien!
Adam Cracknell is easily having the best season of his NHL career in 2016-17.  He's reached a career high in games (58), goals (7) and points (11).  I love it for the 31-year old.  The Stars have already signed him to an extension through next season.  He made it to the NHL during the 2010-11 season but so far has just one NHL card, not counting it's two parallels.  I really hope that Upper Deck gets him into either the second or third series of Compendium.  I became a fan early in the season when it seemed like every two or three minutes, the announcers were saying his name again.  In a disappointing season for the Stars, Cracknell has been a bright spot for me.


I've passively collected Jack Johnson for a few years, since I found out he was born in Indianapolis.  I was living there at the time and there aren't too many NHL players from the city.  I found this one in late December and got a heck of a deal, as a seller was blowing out cards at 90% off.  The scan does it no justice, it's an acetate card and the team logos are underneath the signatures.  It's a fantastic looking card.

I saw this card on someone's blog awhile back and decided to pick it up.  I remember how hot this card was in 1990 and I couldn't pass on some nostalgia for less than 50 cents.