This is the final of four posts on my show pickups from last weekend.  If you missed any of the first three, links are below.

I picked up some cards that I really love on Sunday.  Yes, the T206 card was the big boy, but it's possible to love smaller pickups just as much.

Something that is expected, but I don't like, is the "wheeling and dealing" aspect of collecting.  I'm not a deal maker and rarely try to make one.  I know I should do that more but it's just something that makes me uncomfortable.  I talked to the seller to see if I could get this any cheaper than what he was asking but he wouldn't come down.

I understand.  The card is in great shape.  It's a little off center and has a minor print flaw but I think it's solid.  Did you know that Frank Gatski is in the Pro Football Hall of Fame?  Did you know that per Sports Card Forum's Inventory Manager, he only had eight "cards" produced during his playing days?  Of those eight, only this one was a "mainstream" issue.  I pick up copies of it as I see them, if they are at a good price. 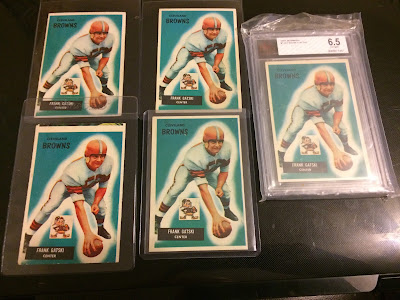 That's my little collection of this card.  I have a couple of cut autos and some other pieces, but they aren't germane to this post.  When I was in my teens, I remember being asked if I knew who he was.  I didn't and was informed, and also told that I had played baseball (and later attended high school with) his grandson.  I was never a friend of the grandson and never had the opportunity to ask him about it.

One other fun fact if you've never heard the name Frank Gatski before today (or perhaps if you had).  He played football at Farmington High School in West Virginia.  Farmington is a coal town that never has had a census population greater than 900 people.  A decade later, another Hall of Famer graduated from that same high school.  If there are other high schools that have produced two football Hall of Famers, I doubt the high school was as small as Farmington.  That other Hall of Famer is Sam Huff.
I got this card off the same seller as the Gatski.  As I was about to leave the show I stopped back by to chat with Dave (the seller) and he took a look through my pickups.  He told me that he has something to give me (seeing what I had picked up) and pulled this card out.  He and I have done a lot of business buying and selling each way and there's no doubt that played a role in it.  A 50 year old PSA 8 card for free?  I can give that a good home!

I wasn't sure exactly what this was when I picked it up.  Neither was the seller.  A couple of minutes of research on SCF and I had it figured out.  I looked and don't see any up for sale on feeBay right now and only found one in the sold history.  They don't appear to sell for much, as the only sold one I found was a SGC96 and sold for just $12.50.  No matter what, it was going to be "worth" the $3 that I spent on it to me.

Like the Gatski, any chance that I have to pick up a Herb Score rookie at a good price, I jump on.  The same seller as the Hornung also had these two copies and I scooped them up.  Score was the color commentator on Indians radio broadcasts when I started listening in the early-1990s.  He's certainly a candidate for baseball's "the greatest that never was" and I'm accumulated a few cards over the years. 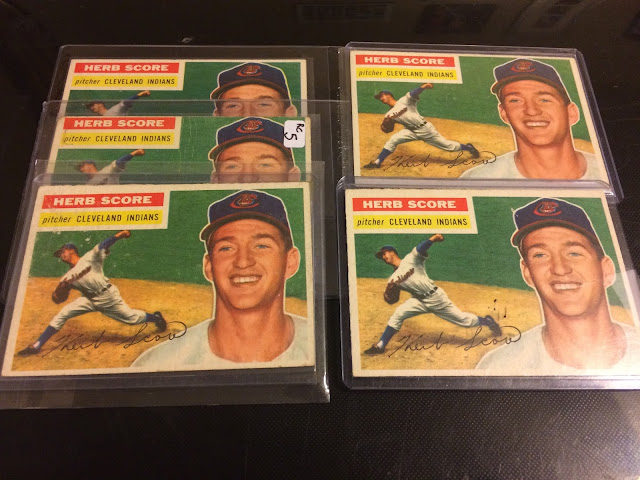 Also like Gatksi, I've picked up a few autographs and other cards over the years.  This will always be my favorite Score card, however.
I'm lucky to have walked out with this card (and the one below).  Once of the dealers was looking to buy all of Rich's (who I bought this off of) vintage graded.  Not sure if they ever completed a deal but I was able to snag these two.

I was surprised at the low asking price on the Paul Waner card.  I love the card and the price I paid is just a little below what it would probably sell for on feeBay, but before the fees.  I'm glad Rich had it because otherwise it's not something that I would have looked for.
This one was really a "I'm already spending xx on the Waner, what's $5 more?"  I mean, it cost more than $5 to get something graded!
The final card I picked up was shortly before I left, from the seller I picked up the Hornung and Scores from.  I already have a copy of this card for my set that I have an attachment to, so this one won't make it into the set.  The one in my set was in the lot of cards I picked up from the Indy Card Exchange when I first started this set three or so years ago.  The Exchange was my LCS in Indianapolis and it, along with the 500, are about the only things I miss about that city.

I got this one for a great price.  I know the centering is off but the color is fantastic and corners and edges are solid.  Perhaps I will find a trade partner someday and use it to pick up one of the bigger cards I still need for my set.

It was a great show.  This particular one is run twice a year and draws some different sellers than the ones that I typically see.  It's also run as a fundraiser, which I like.  Oh, I walked out with some cards I'm thrilled to have.