First things first, if you're reading card blogs and aren't reading the Dub Mentality blog, you are missing out.

I commented on his 1986 Donruss Retro Review how much I liked the image on the Reggie Jackson card.  I few hours later I received a message from Joey and he offered to send me a copy of it.
There's just so much about this card that I like.  So many baseball cards have been produced over time and there are only so many pictures that can be used.  Guy pitching...guy swinging...tens of thousands of them look about the same.

The angle this picture was taken at was different.  The cropping didn't show just a full body shot or a picture from the chest up.  It's different.  How about those trees and that horizon in the background?  You don't see that on many cards.  I love the alternate Angels logo that they used.  I didn't notice it until now, but how about the fact that his hand is moving so quickly that it's blurry?  I don't hate it!  The combination of all those things make this a very visually appealing card to me.

Joey also included a handful of other cards from the set.  The names are all a who's who of my baseball youth. 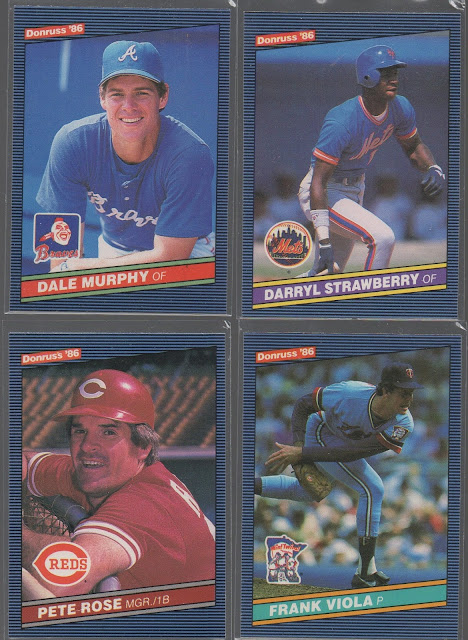 I may have had that Dale Murphy card as a kid, but no longer do after one of my many card purges.  He was my first favorite player and I've been picking up cards cheaply as I find them.  Time moves quickly.  It would be hard for someone born just five years after me to understand just how big of a deal Darryl Strawberry was.  Pete Rose doesn't look right in any uniform other than Cincinnati.  Frank Viola was also a stud and it's sad that he's mostly forgotten about these days.

Thanks for the cards, Joey!  I have your address now and sometime down the road I will get you back.  You never know when.  Oh, and thanks to you I will never be able to look at 1986 Donruss cards without thinking of Max Headroom.
Posted by Kin at 12:00 AM