I didn't even plan to go to a card show this weekend.  Late Friday evening, I was perusing the Net54 boards and came across the post about the show.  I saw that Leon (owner/operator of Net54) was setting up on Saturday only.  He sets up with exclusively vintage, so I decided to make the almost-hour drive.

I didn't come across anything at Leon's table that both did it for me and I could afford, so I didn't pick anything up from him.  However, two was my number of the day.  I picked up two boxes and two singles, off two different sellers and spent only $22.  Walking out without much isn't an issue for me.  I have often been guilty of buying stuff that doesn't necessarily fit into my collection just because I have the money.  No mas! 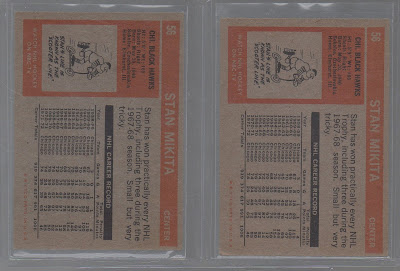 I already have at least one copy of this card, but for a buck each I wasn't passing up more.  These may also be in better shape than the one(s) I have.  The seller stated everything was 20% off the tagged price, but I didn't need him to make change.  I left the table happy. 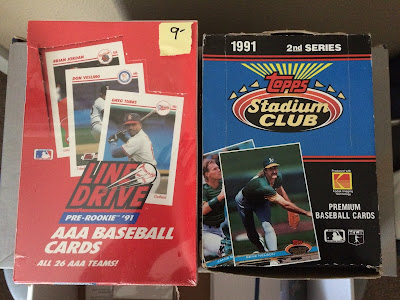 A year or so ago I picked up a box of 1991 Stadium Club Series 1 and a few months ago opened it.  I came up just two cards short of completing the set.  If anyone out there has numbers 181 (Dwight Smith) and 272 (Danny Tartabull) that they'd like to drop into a PWE for me, I'd be eternally grateful!  I don't know what's in series 2, but my hope is that I can complete the set or come very close.  Not sure if there was a third series that I need to be on the lookout for.

To be honest, I'm not even sure who is in the Line Drive set.  What I do know is that I need some minor league Russ Davis cards that people are asking $2.50 for on COMC.  He's a common and shouldn't be that much.  While he's not in this set, there may be a few cards that I can send in.  A couple of weeks ago I read a post on The Greatest 21 Days blog about a player that played his college ball at my alma mater, West Virginia University.  I'm hoping maybe I can find a hidden gem in this set.  If I don't find either of those things, I'm sure there are some bloggers that would like some of the cards, so it's going to be a win no matter what.

The boxes will go onto the rainy day shelf with the 20 or so other unopened boxes I have.  I have so many projects that I want to get done.  I've started a page on Collector Focus, so I have a lot of scanning and organizing to do. I also have boxes on boxes in my closet to organize and enter into my Sports Card Forum inventory.  It may be while before I open these two boxes.  It may be next week.  Who knows?