I received my post-Black Friday COMC shipment a couple of weeks ago.  Between my obsession with Upper Deck ePack Compendium and the holiday, it's taken awhile to make it happen.

I had over 200 cards shipped but many were cards that I'd sent to them and wanted back.  My plan was to do a big port sale to move all of my excess cards, but that didn't work as planned.  I didn't get any offers that were even close.  So, I am bringing some of the better stuff back.  I wanted to move the excess but I'm not giving cards away. 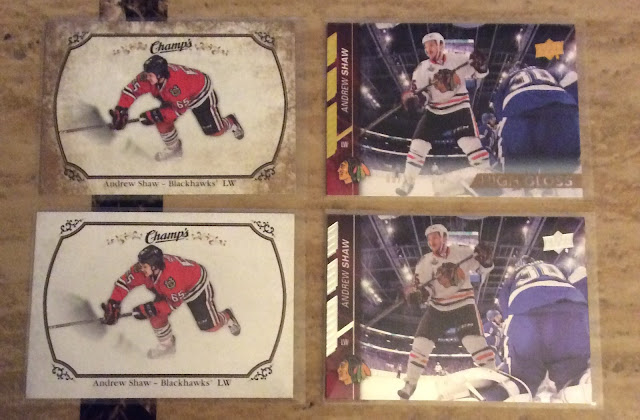 All four of these were bought because I needed them for The Andrew Shaw Project.  I picked up the Silver Foil Board months ago but bought another one later and had it shipped.  The others are all new.  I'll do an additional post in the near future on these cards and update my Andrew Shaw numbers. 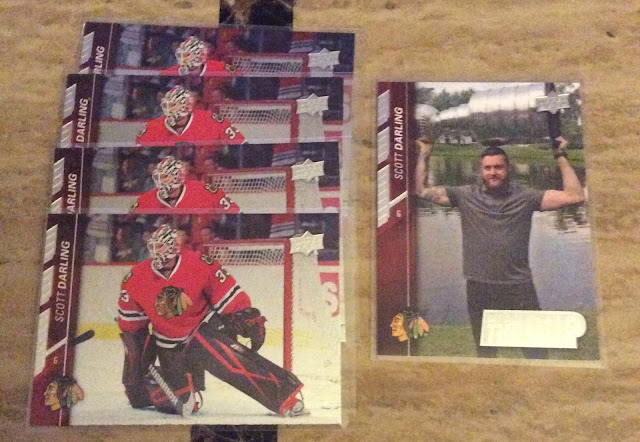 Once the Blackhawks traded Shaw to Montreal, Scott Darling moved up to #1 on my favorites list.  Joke's on me - there's little chance he will be with the team after this season.  Next man up, I suppose.  I'm going to send a couple of the foil boards to him and hope he will sign them. 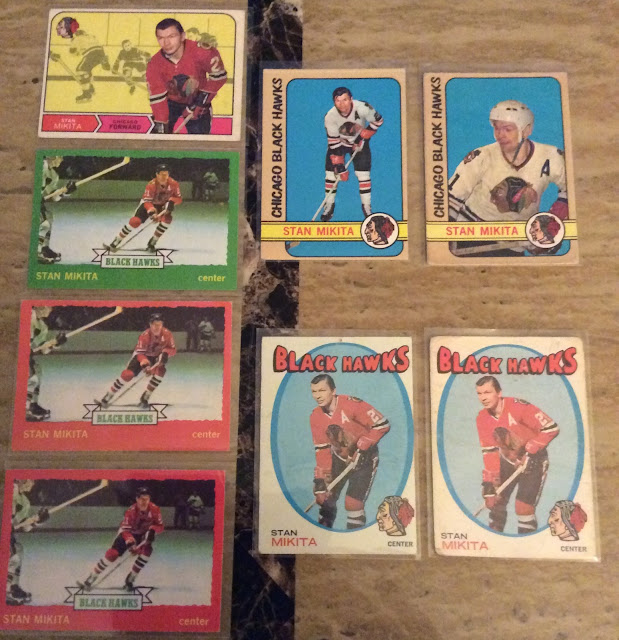 I've decided to start a collection of Stan Mikita cards, playing days only.  These were all low-grade examples that I picked up cheaply. 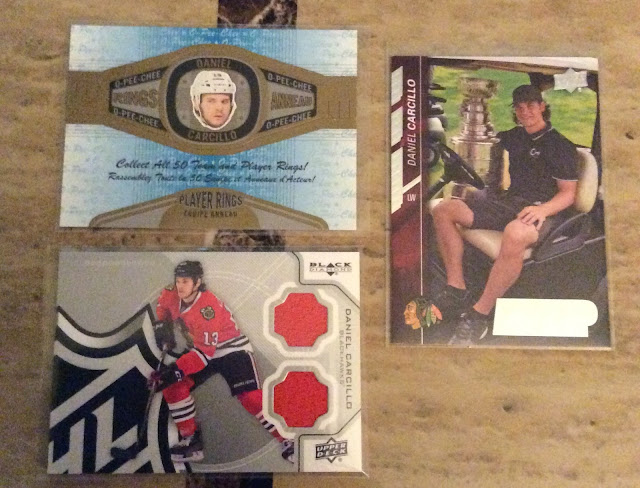 If you read my other blog, you know that I've been a Daniel Carcillo fan since he joined the Blackhawks.  I already had a copy of the jersey card, but this was less than a buck so I wasn't passing on it.  The other two I picked up because they are Stanley Cup related. 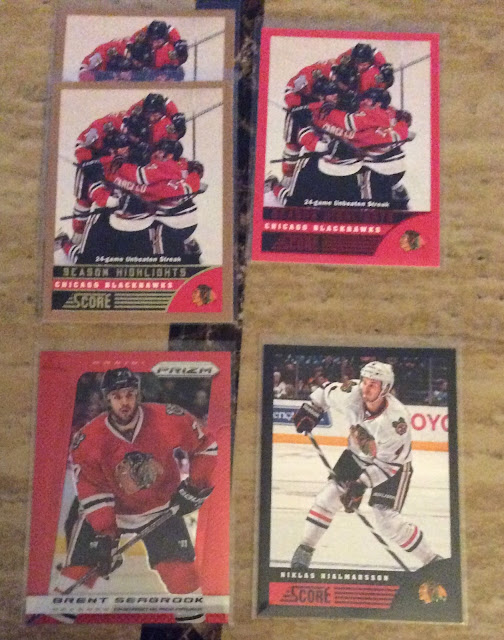 Not that I need more projects, but I've decided to start collecting Blackhawks parallels with red of black borders.  These were some cheaper copies so I went ahead and snagged them.  I also plan to put the 2013-14 Gold Rush set together and one of the team cards is for that and the other for the Andrew Shaw collection. 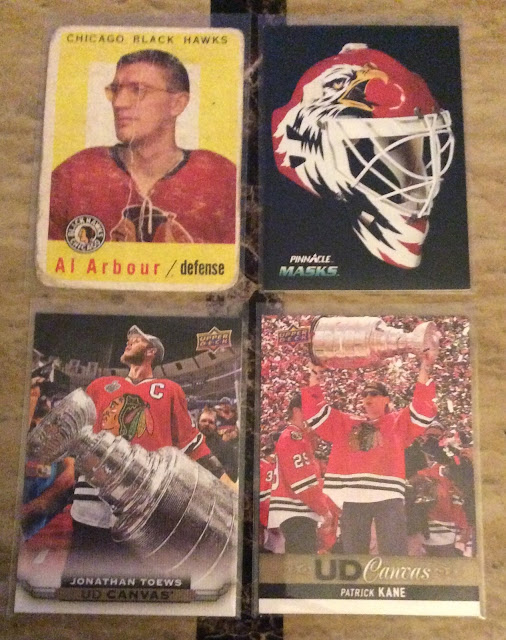 I don't claim to know a ton about hockey history and had no idea that Al Arbour played for the Blackhawks.  When I saw this card I wasn't passing.  I think I snagged it for $4 or so.  I wish that Upper Deck would produce some insert sets revolving around goalie masks.  Goalies are typically quite popular, the mask cards have been quite popular in the past and the goaltenders still put effort into having cool masks.  Seems like a miss on Upper Deck's part.  I wasn't passing on this Ed Belfour card since I didn't have it.  The Jonathan Toews and Patrick Kane cards I picked up because they are Stanley Cup related. 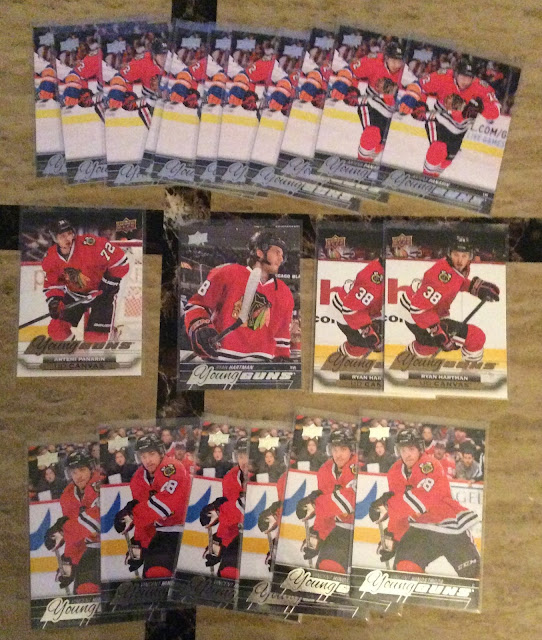 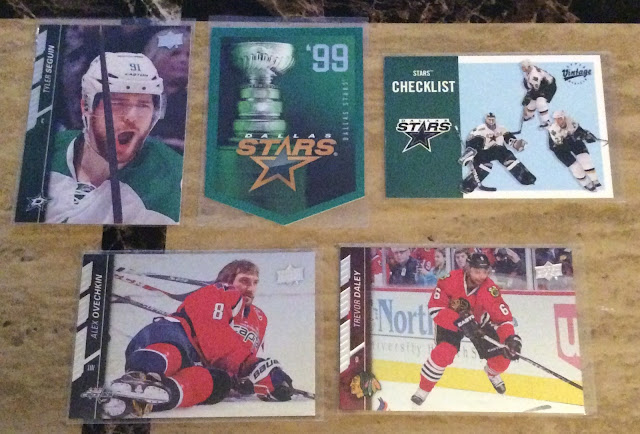 These are pickups for the wifey's hockey binder. 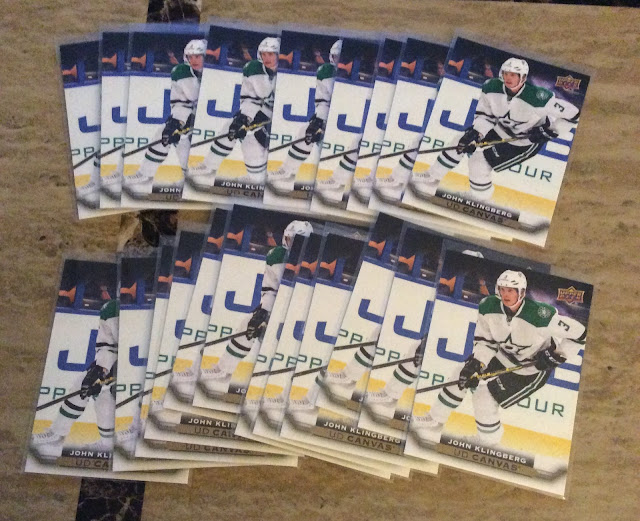 Our household is a big of John Klingberg.  I will probably send a couple of these off and see if I can get them signed.  I'm not holding my breath, but it's worth a shot. 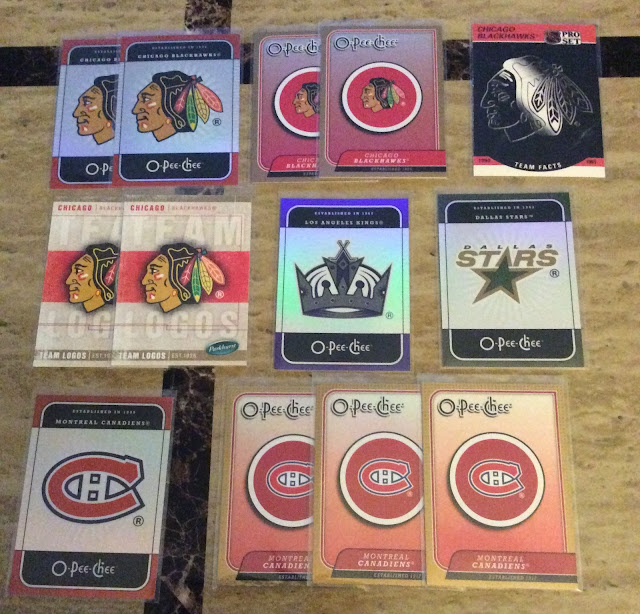 I decided to pick these up as cards to get signed.  Sometimes you want a signature, but the player doesn't have a card in the given sweater yet.  I plan to include one of the Canadiens ones when I send to Andrew Shaw. 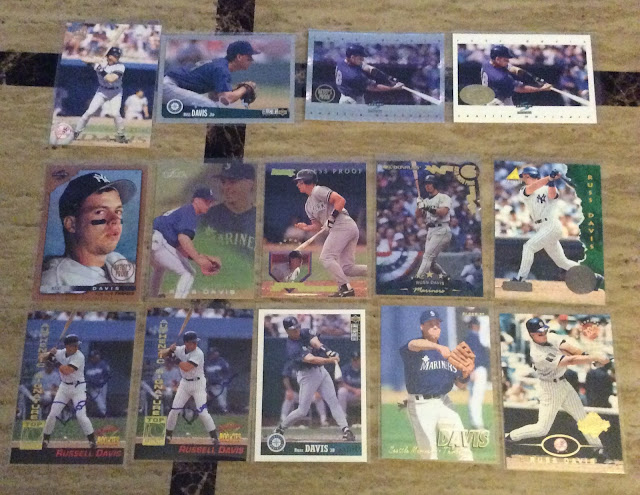 Leaving the hockey, most of these are Russ Davis cards that I needed for the collection.  I had copies of the autographs but these were cheap, so why not?  You'll see more about Russ Davis in the future. 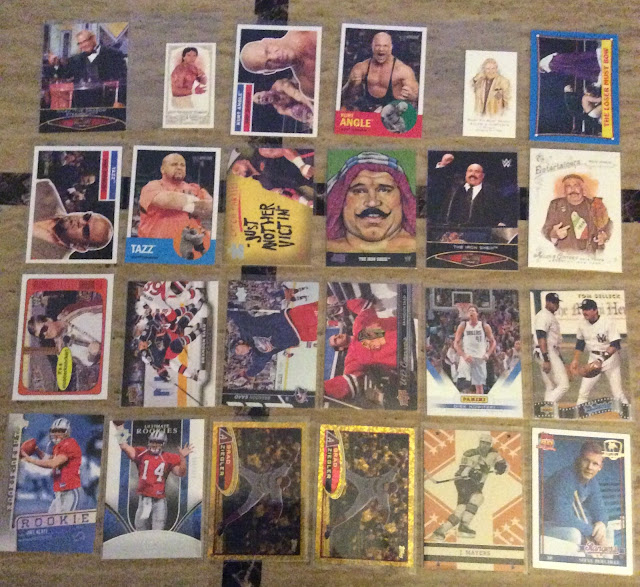 These are all cards picked up with the sole purpose of sending them off for TTM autograph requests. 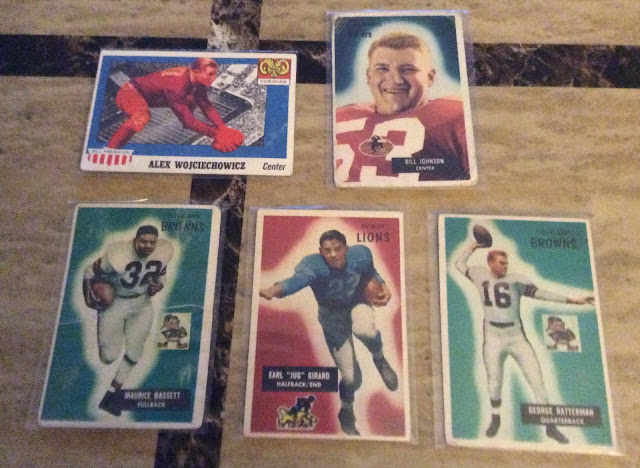 Some random low-grade football cards for sets that I'm (very) slowly piecing together. 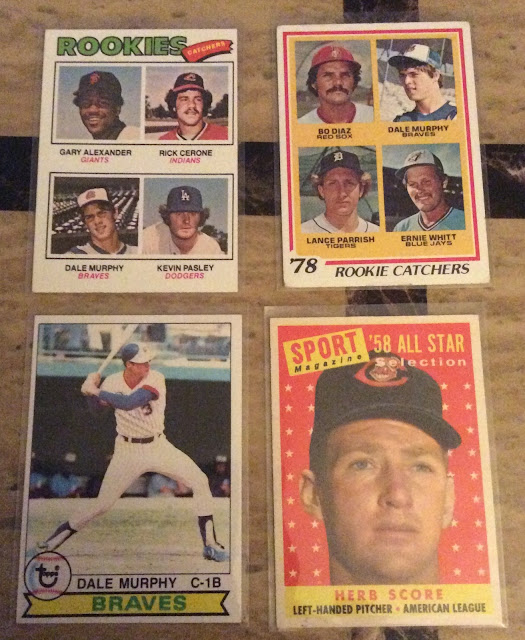 Dale Murphy was my first "favorite player."  Somehow, I never owned a copy of his rookie card.  Until now. 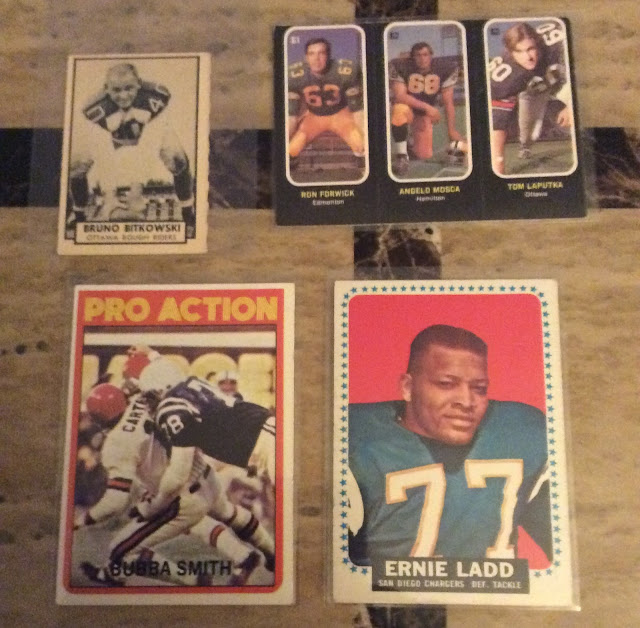 The top two cards are vintage CFL cards.  I am the kind of random.  I will pick up Bubba Smith cards sometimes just because I loved his character (Arnold) in the movie Stroker Ace.  Ernie Ladd is a WWE Hall of Famer.  It just seems natural that I have one of his cards. 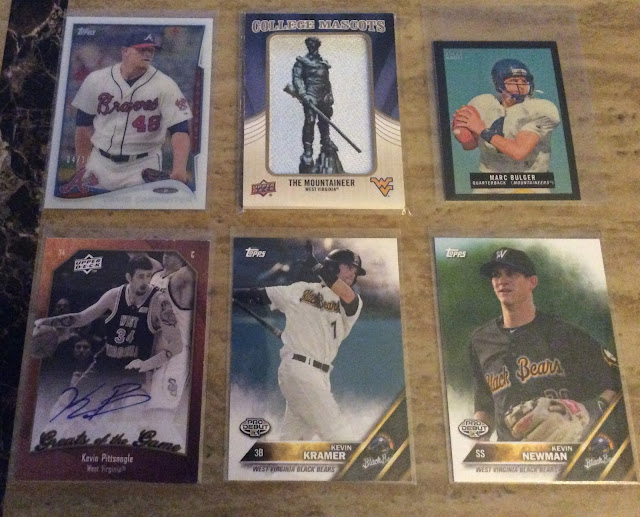 All of these cards have some correlation to my hometown.  David Carpenter played at WVU.  The card is an acetate /10 and I'd had an eye on it for awhile.  It was heavily marked down during Black Friday sales so I pulled the trigger while I could.  The Mountaineer, Marc Bulger and Kevin Pittsnogle are all obvious as to why I snagged them.  The final two are players for the West Virginia Black Bears.  The minor league team has completed two seasons and plays in my hometown (Morgantown, WV).  I have no idea why it took so long for the town to get a team.  Even in the 1990s I wondered how Appleton, WI could have a team but Morgantown couldn't.  I do still wonder. 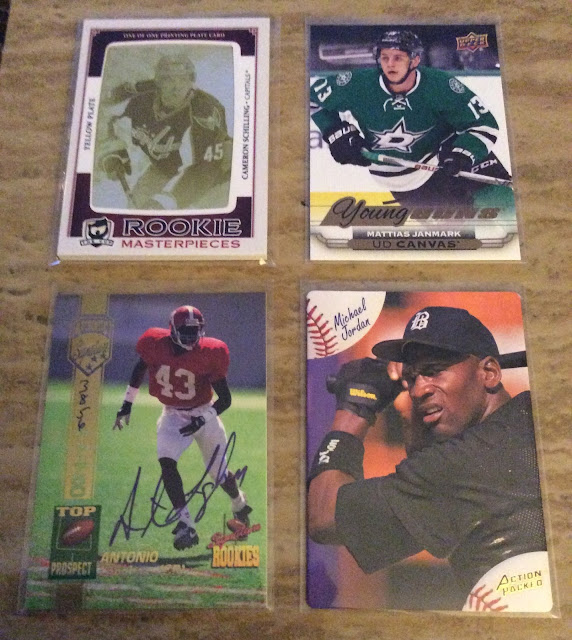 The last photo is a little bit of randomness.  I have a secondary collection of Cameron Schilling so when the plate was marked down, I wasn't passing.  No idea why I got the Janmark, it must have been cheap.  I picked up the Antonio Langham because I am a college football guy.  You may not realize it, but he is a player that played a significant role in where college football is today (for better or worse).
Finally...the Michael Jordan.  I was organizing my collection a couple of months ago and realized that the only Jordan cards I have are baseball.  I'm not too surprised by that.  I decided to see what other cards were out there that I didn't have and came across this one.  I had this "back in the day" and sometime along the way got rid of it.

I'll always be fond of his baseball cards.  Why, you ask?  I was in the Hoover Met the night that he hit his first minor league home run.  I wish that I could prove it but I don't have a ticket stub or anything.  I had a program, but it was lost when my dad's house burnt down.  I have the memory, though, and that's all I need.
Posted by Kin at 1:22 AM 1 comment:

I'm over the "Card Lottery"

It's been trending this way, but on Wednesday the moment finally hit.

I've always been of the "no pack left behind" philosophy.  Never leave one pack in a box if you make a purchase.  If there's only one pack, buy it.  At a local card shop, there was one pack of 2016-17 Artifacts left.  I bought it.  This is what I received for $13. 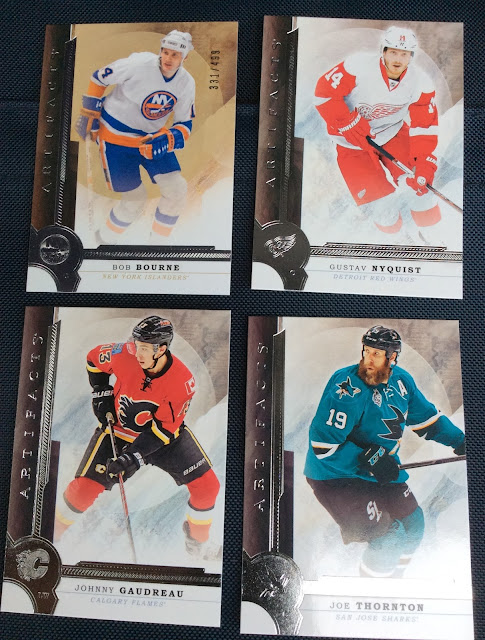 Yeah, I got one numbered card and a bunch of base.  Sure, it's just one pack.  However, think about all of the boxes you've purchased and after opening them, were basically left with nothing.  It happens to me almost every time.  I'm over it.

The name of my blog is "I Feel Like A Collector Again" and this purchase is a prime exhibit of what I'm referring to.  I'm not buying boxes anymore looking for that "big hit."  I'm buying things that I want to collect.  I'm buying boxes of cards when I want to make sets.

In the last couple of months, the boxes I've purchased are Series 1 hockey, multiple Parkhurst blasters and a few e-Pack Compendium boxes.  I will put together the Upper Deck and Parkhurst sets.  I'm not working on a Compendium set, but I am using the cards to trade and achieve other goals.

These are all "low-end" sets.  They have long odds of hitting a "big" card.

However, I'm having as much fun as I have had in a long time.  That's what a hobby should be, fun.

Y'all can go blow hundreds and thousands of dollars to get a McJesus The Cup /99.  Good luck with that.  I'm done throwing my money away in the "card lottery." I can buy what I truly want a lot cheaper.  Hopefully Upper Deck continues making sets geared toward real collectors.

Black Ice has made it to Texas

We are supposed to have the first freeze of the season tonight in Texas, but that's not what I'm actually referring to.  As the Andrew Shaw cards that I need (and aren't having asinine prices asked for) have dried up, I started looking into some of those hard-to-find, but non-numbered ones I need.

One of those is the 2012-13 Score Black Ice cards.  I fired up the google machine and couldn't find much concrete info on them as far as print runs and availability.  Eventually I came upon an old thread on Sports Card Forum and posted, wondering if anyone had any additional info.  Unfortunately, not too much.

My own research on available and sold cards, posted in the thread, was this (numbers are as of November 17):

I checked COMC over Thanksgiving weekend in hopes that someone would heavily mark one of these down.  No luck.  I've decided to "collect" these when I come across them cheap.  The only one I've bought arrived on Monday. 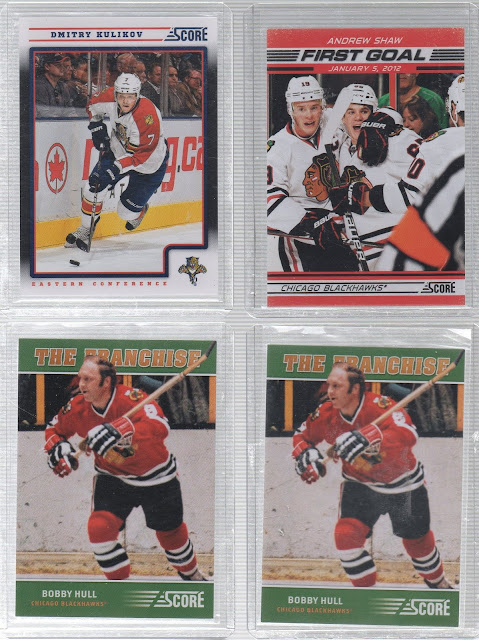 Shipping from this Sportlots seller was the same up to four cards, so I bought the additional ones from him for 18 cents each.  Seems foolish not to take advantage of that.

If you have any of the Black Ice cards that you have no use for, let me know!

Two weeks ago, I didn't even know that this Andrew Shaw card existed.  I'll never be one that knows everything, but I'd like to think that I know what is out there and I'm slightly embarassed about it.  I found out about it in a piece from Puck Junk.  I read it in the early afternoon and spent more of my work day than I should have looking online for it. 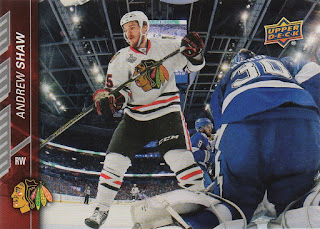 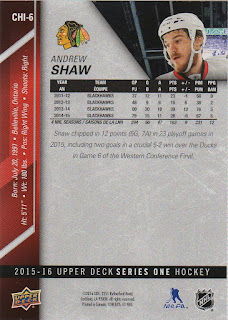 I received a message about a Sports Card Forum thread I started asking if anyone had one of the cards (or even the entire set).  It was from a Marian Hossa collector and he asked me to let him know if I came across a set.  I told him I would and that if I found it, I'd send him the card.  I love getting cards into the correct hands.

It wasn't long after that he asked me for my address, because he found one on eBay.  Obviously my searching leaves something to be desired.  However, this beauty showed up yesterday.

If you read this, thank you Aaron!
Posted by Kin at 5:50 PM No comments: