Context clues tell me that when Nachos Grande asked bloggers to write about the toughest set they've built, he was thinking baseball.  He's a baseball guy.  It has "bat" in the title.  He mentions baseball season.

I don't collect baseball and when I did, there was no project I took on that was much of a challenge.  About a year ago, I was perusing the Beckett website and found their listings of sets.  A few caught my eye and I will work on them in time.  However, the one that I decided immediately to take on was the 1911 American Tobacco Auto Drivers (also known as T36) set.

"This 25-card set was produced for The American Tobacco Company. Each card includes a small ad for either Hassan or Mecca Cigarettes on the cardback. All 25 cards were produced with both ad back variations. The cards measure 2 1/2 x 1 3/4 and came with square corners. The cards are unnumbered and feature top race car drivers of the day from both North America and Europe representing all types of auto racing events. They were packaged one card per 10 cigarette pack and two per 20 cigarette pack. The cards were inserted in cigarette packs starting on March 27th, 1911 and ending on March 31st, 1911. Special thanks to Jon Hardgrove for providing much of this information."

I apologize if some of this seems familiar.  I wrote on my old blog in October a post that was pretty in-line with this Bat Around subject matter.  You may have seen it, but I'm not going to copy and paste that post into this one.

The set is considered "complete" having one front of each cards.  This is a 25-card set.  I mentioned in the prior post that I wasn't sure if there were four back variations of each, but suspected there are.  A few weeks ago I found a thread response from Jon Hardgrove (mentioned in the blurb from Beckett) that it is a 100-card set and that it took him 30 years to complete it.  I believe that means this will be a very long-term project.

All sets have variables that can make it difficult to assemble the complete set.  The famous T206 set is referred to as "the monster." The difficulty with this set is the cost.  Most everything can be found, you just need the money to buy it.

The difficulty with the T36 set is simple.  There's just not much out there.  The set was only printed for a matter of days.  In the year since I found out about the set, I've only picked up seven cards.  If memory serves me correctly, I've missed out on less than five that were auctioned on eBay.  Currently I can find eight listed on eBay and two more in the sales history (I won one of those two). 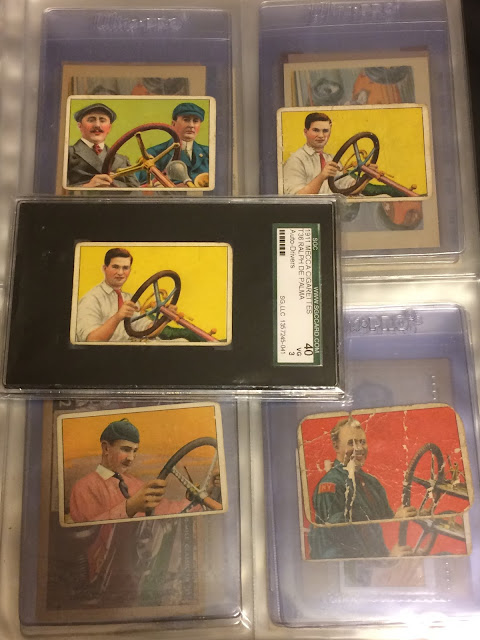 I have searched via Google in attempt to find more of these for sale.  Those efforts have been fruitless.  I've found a handful of old auction house listings that have had some of these in them.  Most of those have been just a handful of cards inside a lot of hundreds of others.

It appears my long-term option is to get money together and have for when a nice lot comes available via an auction house.  Other than that, I'm just going to keep trying to pick them off one-at-a-time.  If you have any suggestions or leads, I'd love to hear from you!