If you read my post from Thursday you saw that I picked up three T206 cards last weekend.  I've been reading more at Net54 and looking at some other sites since then.  I found a thread on Net54 that "ranks" your collection against others.  I'm both analytical and competitive, placing this right in my wheelhouse.

The first five cards I acquired were raw copies and off two sellers that I trust greatly.  This (raw and in-person) is how I would like to acquire most of mine.  It obviously won't work that way often over the course of time, but I will do my best.  I picked up another T206 Friday.  It was in-person, but it's not a raw copy.

I was in Dallas for work and made a very quick stop at Nick's.  I looked and didn't see any T206s in the case.  I asked and the guy told me that they had a few when he last worked but he didn't see them and they must have been sold.  DRATS!  I looked at some other things in the shop and thankfully as I was about to head out I took one last look.  They had one. 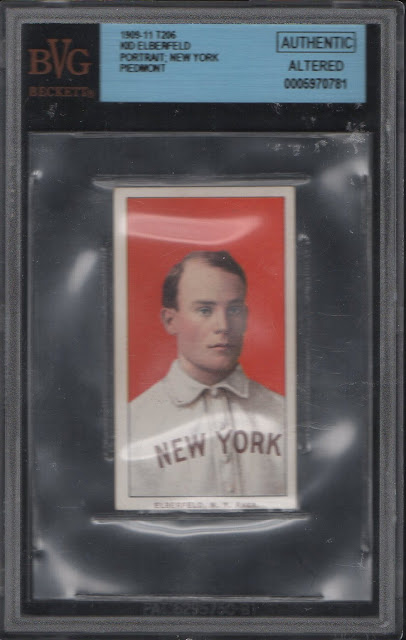 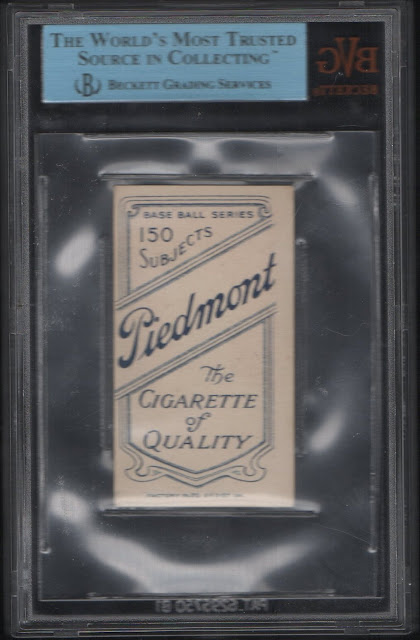 I actually did debate for a few minutes if I wanted this or not.  There were pros and cons.

CONS:  It is encapsulated.  Not only that, but it's an "authentic" and "altered."  He told me that it's likely trimmed.

PROS:  It is a T206.  I did a quick look on eBay and it's once of the more scarce cards.  That's what sold me.  I may have overpaid a little, but graded, scarce copies aren't going to be cheap when I can come by them.  I don't want to have a collection full of trimmed cards, but I'd rather have a trimmed one than a fake.  At this point, I'm not knowledgeable enough to figure out what's authentic and what's not.  According to T206 Insider, this card is the 71st most scarce of the 524 cards in the set.

Also about this card from T206 Insider:  "Another “traded” subject, the New York Highlanders portrait of “Kid” Elberfeld was part of the original 150 series launch and replaced with its counterpart, Elberfeld (Washington Portrait), shortly after 350 series printing began. The early swap-out accounts for the relatively high difficulty of the New York version."