I've collected cards for more than 30 years, but I don't have many "big" cards.  I think it's related to the fact that even as a kid, money burnt a hole in my pocket, as my parents called it.  I've been one to buy cards when I could, instead of saving for high dollar ones. 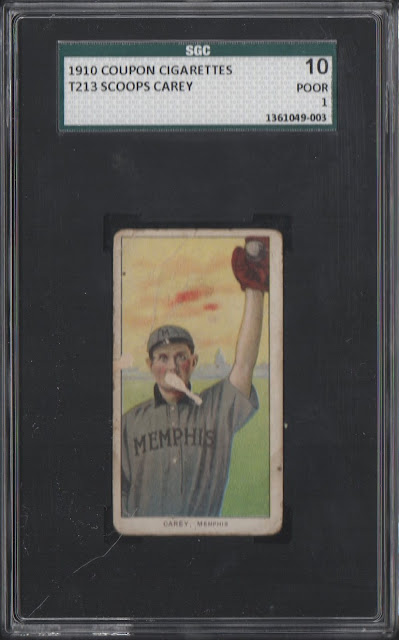 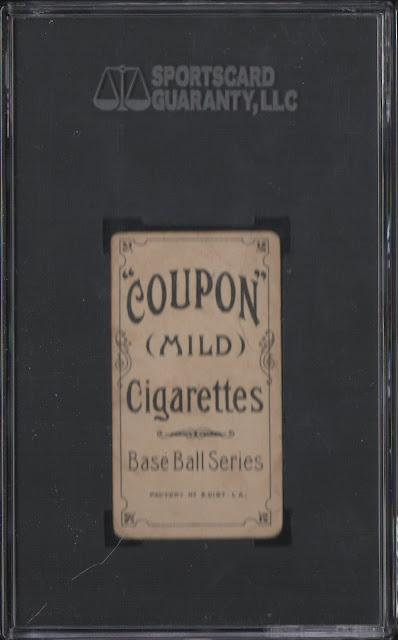 It looks like a T206, but it's actually a T213-1 card.  There is much debate among collectors if the T213-1s should actually be classified as T206 but that change will never happen.  One person that believes they should be is Anson of Pre-War Cards, whose opinion I greatly respect.  If you're interested to read more about that, click on the link below.

One of my collecting goals for 2018 was to add one of the two T206ish Scoops Carey cards, SGC graded, to my collection.  The ultimate goal is to have the "rainbow" of all four backs, SGC graded.  If you know me, or read one of my recent posts on my other blog, you know that I love the black borders on the slabs.

I already have the two easiest and cheapest copies to find, the T206 Piedmont and Old Mill backs.  This T213-1 and the T206 Hindu back are significantly tougher to come by.  When you add that I want it SGC graded, it becomes a challenge.

Per Vintage Card Prices, the most recently copy of the card (VCP only tracks graded cards, sold on eBay or auction houses) sold in November 2016.  The only other recorded sale was in 2007.  Another number that legitimizes the cards scarcity is that just ten copies of the card have been graded, five each by PSA and SGC (that's if none of them were cracked and cross submitted).

At the end of the day, I was looking for a 100+ year old card that there are five (or less) copies of.  I thought it would be years before I saw a copy but I was wrong.  Another collector on Net54 owned this copy and was looking to sell.

The paper loss on the front bothers me but it wasn't enough to keep me from buying.  I knew that it might be years before I'd see a copy of the card for sale again.  If and when I do, there's no guarantee that I will get it.  Given the opportunity I will upgrade this card.  The four other copies are graded 10, 30, 30 and 50 so they all should have better eye appeal.

Until then, I am more than happy with this purchase.  Although the card cost more than I've ever spent before, I believe that the price was in line with the limited market.  Besides, who knows if I'll even have another opportunity?

I mentioned that is my third of the four cards.  Is there a better way to show them than side-by-side?  I think not. 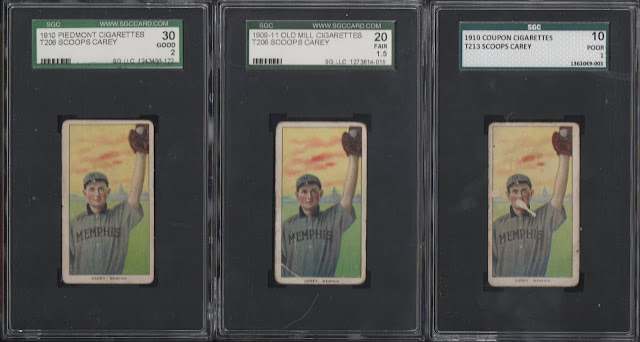 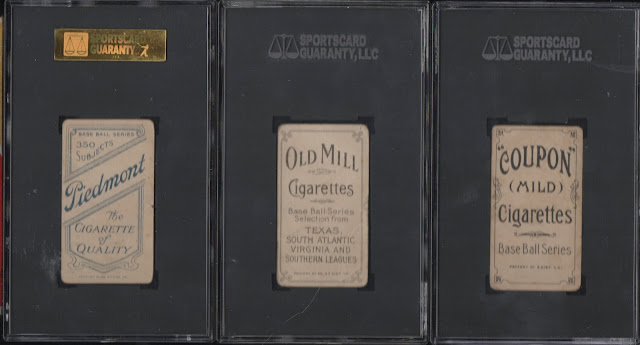 If you shop online and haven't signed up and used ebates yet, you're missing out.  I also use it on eBay to get money back from purchases there.  Between referrals and cash back, I've gotten over $150 in a year.  They put $63 in my Paypal account last month!  FREE CARDS!


If you're on Twitter, please give me a follow.  You can also find me on Trading Card Database.  I love trading cards, when it makes sense.  Happy collecting!