It's been almost three months since I added to my T36 collection.  A few items have come available at auction, but for some reason the prices are going up.  I don't know the reason, but I'm not looking to pay almost $20 for singles from the set (other than a couple of guys).

After missing out on a few and wondering if I needed to raise my price expectations, I wont a lot of three cards at a very good price.  My persistence and stubbornness paid off.  I paid for three cards what some singles were going off for in the last few months.  I don't understand it but I already knew that I'm getting the best prices buying in lot form.

Something I found interesting that all three cards had the same brand/factory combination.  In time I want to analyze the purchases I've made and where they came from to see if there's regionality to it.  The cards are more than 100 years old so they could have been bought and sold to different parts of the country, but I don't think enough that it's improbable to find a trend.  These aren't T206 cards that have been sold dozens of times. 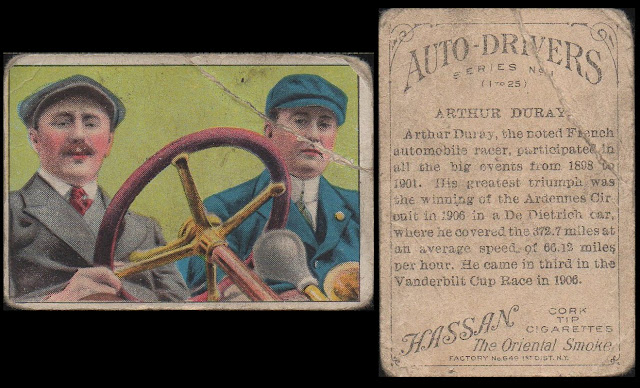 The first card in the lot is Arthur Duray with a Hassan Factory 649 back.  My 30th T36 is also the second duplicate that I have.  Oddly enough, the other is a Duray Mecca 30 back.  There are 100 cards in the master set (25 different drivers) and my first two duplicates are both Duray.  I find that interesting.  This copy is certainly NOT an upgrade but I will never be sad having multiples.  Perhaps I will find a trading partner someday. 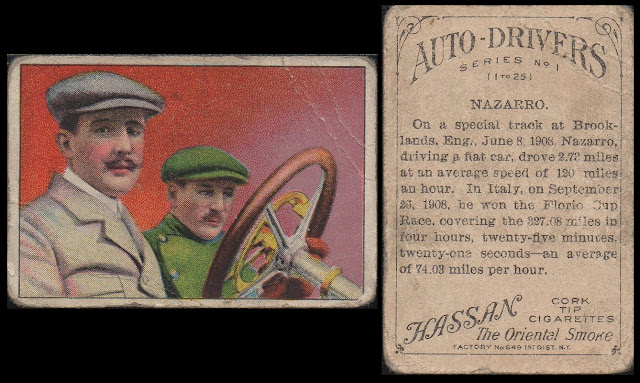 The Felice Nazarro Hassan 649 copy isn't a new front for me, but I'm thrilled to "upgrade" my base 25 driver set.  If you look at my cards on Collector Focus, you'll see that my other Nazarro copy is only about 85% of a card.  It's such a rough copy that it doesn't even count for my master set because the brand and factory can't be read.  Despite the three creases it has good eye appeal and this is certainly my favorite of the three additions.

My fiance and I have been watching Cheers lately on Netflix.  Looking at the first two cards, the four men pictured look like they'd fit into one of the paintings on the Cheers open when the theme plays.  Yeah, that was random. 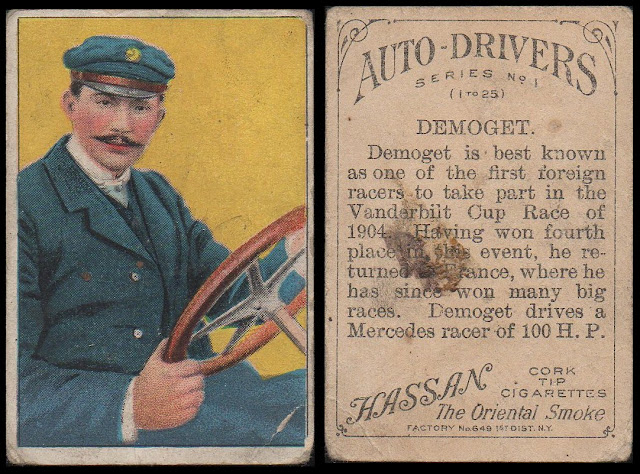 Last but not least is the black sheep of the T36 set.  I believe that Demoget to be the only non-horizontal card of the set.  There's only one image that I haven't accounted for to date.  This is another new card to the master set.  While it's likely happenstance, both copies of this card that I own have the smaller right border.  I'm interested to see if this plays out in time.  Could it be due to the portrait orientation?  Doubtful, but I'm an analyst.  It's even in my job title.  I love this type of thing.

With these three additions, my base set is still at 22 of the 25 cards (88%).  I need copies of the Herbert Lytle, Ferenc Szisz and Barney Oldfield cards.  I have two new cards toward the master set and now am at 31/100 (31%).  I really need to have cash ready so that the next time a set or large lot show up at an auction house, I can pounce and do some SERIOUS damage on the need list.  Until then, I will keep plugging away.

If you're on Twitter, please give me a follow.  You can also find me on Trading Card Database.  I love trading cards, when it makes sense.  Happy collecting!
Posted by Kin at 6:30 PM