Cards from the East and Wes

A couple weeks ago, Wes (of Willinghammer Rising fame) posted some cards for trade on Twitter.  It was simple - claim a card, or cards, and send him something back.  I already had a couple of things to send him, so I looked through to see if there was anything that caught my eye.  If there wasn't, I planned to drop his cards in the mail soon, so this was just a bonus.

I only claimed one card and Wes quickly replied that it was mine.  I believe that I was a few hours late to the party and I'm glad there aren't too many Indians card collectors.  I snagged this... 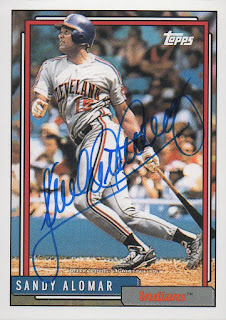 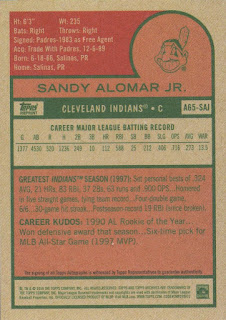 Baseball bores me and I don't watch it anymore.  However, it was the first sport that I loved.  After being a Braves fan (because of Dale Murphy) and then Giants fan (Will Clark), I settled in the early 1990s on the Indians.  My parents bought me a stereo and I could get WKNR out of Cleveland.  I spent many evenings listening to Tom Hamilton and Herb Score call Tribe games.  I have a few autographs of mid-90s Indians, but I need to get more.  I'm thrilled to add this to my collection.

After all was said and done, I asked Wes if anyone had claimed one other card I was interested in.  The answer was no and I was also able to acquire this one... 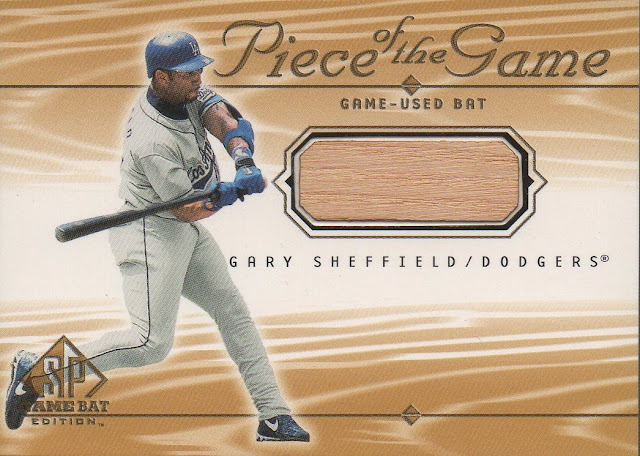 I understand the reasons why, but I feel that Gary Sheffield is one of the most underrated players of my generation.  I won't say he's a favorite of mine or anything.  Picking up this card was about the set and not the player.  I have a few cards from this set (Gwynn, Will Clark, and Kenny Lofton) and if I ever see them cheap, I pick them up.  If I ever acquire enough, it might be worth making a project.

Wes also included three other cards...and they are some goodies!  Obviously he reads my blog (or Twitter) and knows that I'm a West Virginia alumnus.


There is a very loud group of people out there that complain about companies without logo licenses producing cards.  You're allowed your opinion, but you know what they say about opinions.  I think this is a beautiful card.  The blue version of the cards makes it that much better with a Mountaineer. 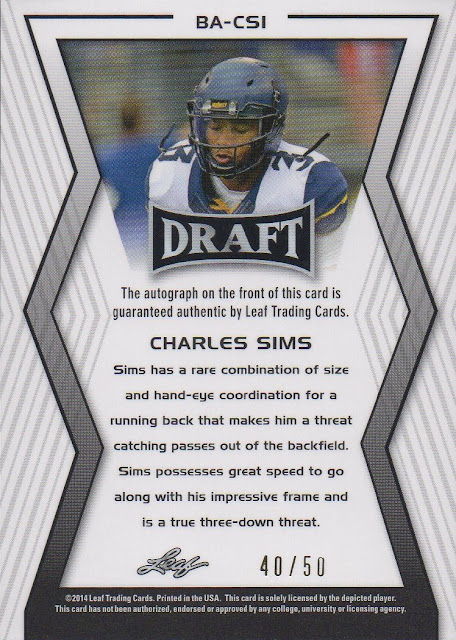 The Mountaineer trend continues with the second card added.

I'm not an NFL guy, I'm a college guy.  I don't care for Mountaineers in NFL uniforms (unless there's nothing out there in the WVU uni)...BUT I really like this one!  I love Topps Xfractors.  I was just sitting here looking at this card and turning it and it reminds me of the first time I saw Fleer Metal cards.  I think it was 1993, maybe?  The momentary reflection back to a much more innocent time was very nice.

So, yeah, I dig this card.  I dig it to the point that I may look into getting as much of the rainbow as I can.  I'll never have that Superfractor, but what can you do?

Competing the Mountaineer trifecta is one that I really like because of the color.  Anything Mountaineer related in blue is good and this one looks great combined with the Bears color scheme.

Thanks for the cards, Wes!  I promise that they are in a good home.  I hope you like what's come back in return and I am always on the lookout for Willinghammer cards for you!

If you shop online and haven't signed up and used ebates yet, you're missing out.  I also use it on eBay to get money back from purchases there.  Between referrals and cash back, I've gotten over $150 in a year (including $15 back on one Black Friday purchase last week).  FREE CARDS!  If you're on Twitter, please give me a follow.  Happy collecting!
Posted by Kin at 7:30 AM