Earlier this week I went back to my desk after a meeting, only to find an envelope had been delivered.  I wasn't waiting on anything (that could possibly have been delivered already), so I thought that perhaps it was a Secret Santa delivery.  It wasn't, which is a good thing!

I bought some cards off Jason a couple of weeks ago, including a lot of 2017-17 UD Canvas cards.  I was going to link to that post, but it seems I've failed as a blogger.  I did share it on Twitter, though.    We've been sending cards back and forth since 2014 that we knew would fit into the other's collection.  It had been awhile, but it appears that it's "game on" once again!

By the way, if you have a Nolan Patrick Canvas Young Guns, Jason is looking for one.  Hit him up on Twitter. 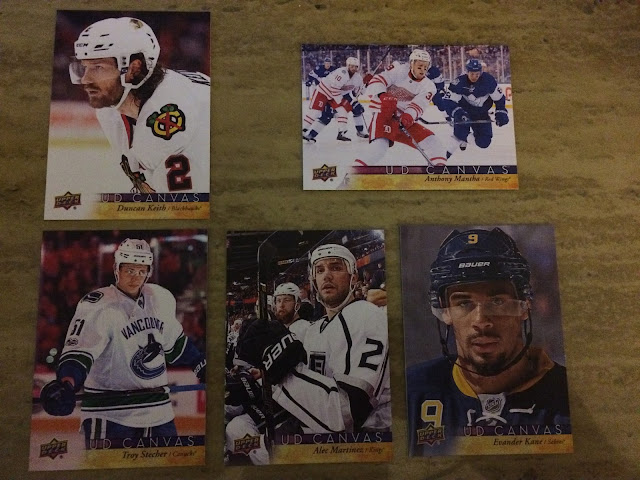 The five cards are all ones that I need for the set.  WAHOO! 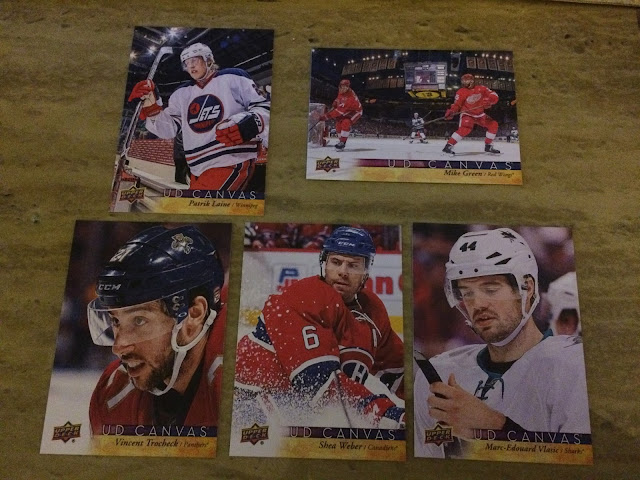 There were some doubles, but hopefully I can find a trading partner either on Trading Card Database or one of the other places that you can find me.

Thanks so much, Jason.  I'll have to find something to hit you back with!

If you shop online and haven't signed up and used ebates yet, you're missing out.  I also use it on eBay to get money back from purchases there.  Between referrals and cash back, I've gotten over $150 in a year (including $15 back on one Black Friday purchase last week).  FREE CARDS!  If you're on Twitter, please give me a follow.  Happy collecting!
Posted by Kin at 6:31 PM