#UDRAK from That Sports Card Show and Upper Deck

Recently David Anton of Upper Deck was on the "That Sports Card Show" podcast talking about social media and a bit of ePack.  They gave away a few (ten, I believe) #UDRAK maildays and I was fortunate enough to be selected.  I saw tweets over the weekend that people had received them and I figured today was my day.

Sure enough, when I returned to my desk from my Monday meeting, two envelopes (I will post the other tomorrow) were on it.  It doesn't matter if I'm at work, I always open bubble envelopes immediately. 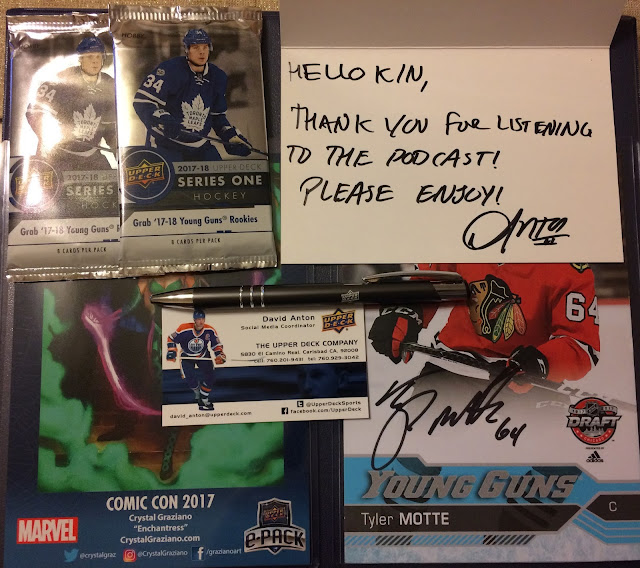 The winners were contacted on ePack (you had to have an ID to win) and asked what we collect.  I'm a Blackhawks guy and Upper Deck didn't disappoint.  I don't know all the details of the distribution, but a signed Tyler Motte oversized Young Guns is a very cool piece to add to my collection.  With the NHL Draft logo on it, I believe it was likely signed at the draft in Chicago this year.

I'm not sure exactly what the Marvel piece is.  I will definitely give it to a friend for his son that's into the comic thing.  A highly underappreciated item that companies send sometimes are pens.  I work an office job and use them all the time.  I also keep track of mine and there's no doubt that I will use this one until it's out of ink.

Finally, two packs of Series 1 were included.  So far I've only purchased two blasters but I do want to complete the set.  Hopefully inside is a handful of cards that I can use for my set. 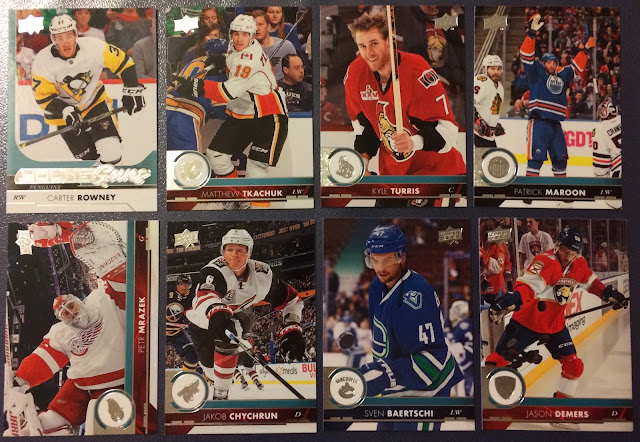 YOUNG GUNS!  They are 1:6 packs and I beat the odds here.  While I really wanted to pull an Alex DeBrincat, I need this one for my set, making it a win.  I also needed the Jakob Chychrun for my set.  I can't complain at 25% cards I needed in a pack that I paid nothing for! 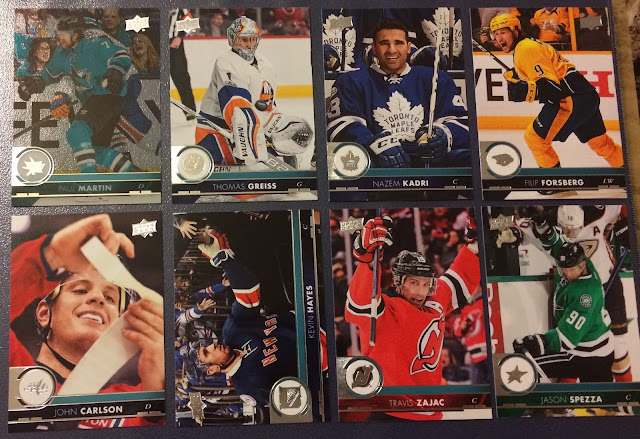 Not only did I beat the odds in pack one with the Young Guns, there was a Paul Martin Clear Cut Parallel in my second pack.  Those are 1:72 packs and it's only the second one I've pulled from a pack.  I opened three boxes last season and got one, falling right at the odds.  In other good news, I needed the other seven cards for my set.

Thank you for the contest and the cards, The Sports Card Show, David and Upper Deck.  While I may have some gripes time to time, I truly believe that none of the other card manufacturers comes anywhere close to taking care of their customers.  Upper Deck's social media presence has a lot to do with it.  You can disagree, it's just what I see.  The others could, and should, learn from Upper Deck.

If you shop online and haven't signed up and used ebates yet, you're missing out.  I also use it on eBay to get money back from purchases there.  Between referrals and cash back, I've gotten over $150 in a year (including $15 back on one Black Friday purchase last week).  FREE CARDS!  If you're on Twitter, please give me a follow.  Happy collecting!
Posted by Kin at 7:31 PM