After confirming Friday that Parkhurst hockey was sent to the States, I headed to a couple of Walmarts after work in search.  I only found one blaster (boo!), but at least I found one blaster.  I want to put the set together and perhaps complete the insert sets as well.

As I posted on A Pack To Be Named Later, it's difficult to be disappointed in the Walmart-exclusive Parkhurst product.  If you are, that's on you and you're a bad consumer.  The product delivers exactly what it should and perhaps more.  Last year, there was an unannounced "'Tis The Season" insert set that was pretty scarce.

The set is popular among set collectors.  It's a larger set, but it's down to 300 cards this season (it was 400 last year).  Also, no short prints are a part of the base set.  An additional bonus for some is the set containing some of the first game-action cards of Las Vegas Golden Knights players. 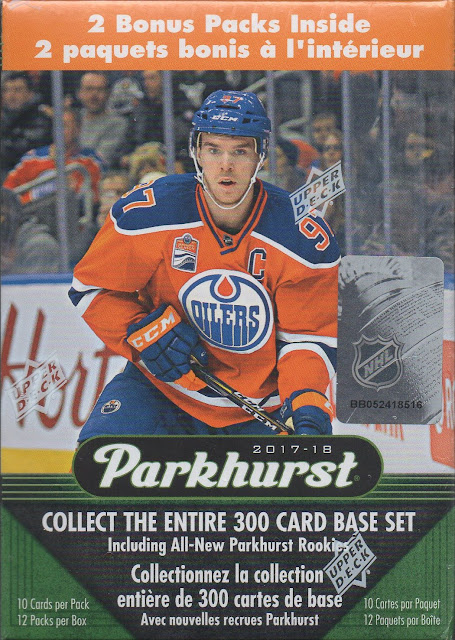 Every blaster contains 12 ten-card packs.  Typically you will receive one parallel or insert card per set.  I'm not going to "rate" sets and/or boxes, but if I did, I would probably give this a 10/10.  If you want inserts or high dollar cards, spend your money elsewhere for the card lottery.


If you're planning to put the set together, let me know.  Once I pick up a few more blasters up, perhaps we can help each other out.

If you shop online and haven't signed up and used ebates yet, you're missing out.  I also use it on eBay to get money back from purchases there.  Between referrals and cash back, I've gotten over $150 in a year (including $15 back on one Black Friday purchase last week).  FREE CARDS!  If you're on Twitter, please give me a follow.  Happy collecting!
Posted by Kin at 5:30 AM