Three package were delivered to me at work today.  It was a darn good mail day.  Two packages were cards and the other was my order of two tees from Outkick the Coverage.

When I walked into the house, I saw a bubble mailer on the table.  I wasn't expecting anything.  The return address was Shane's, of the Off The Wall blog.

The first thing I did was read the enclosed letter and that alone made my jaw drop. 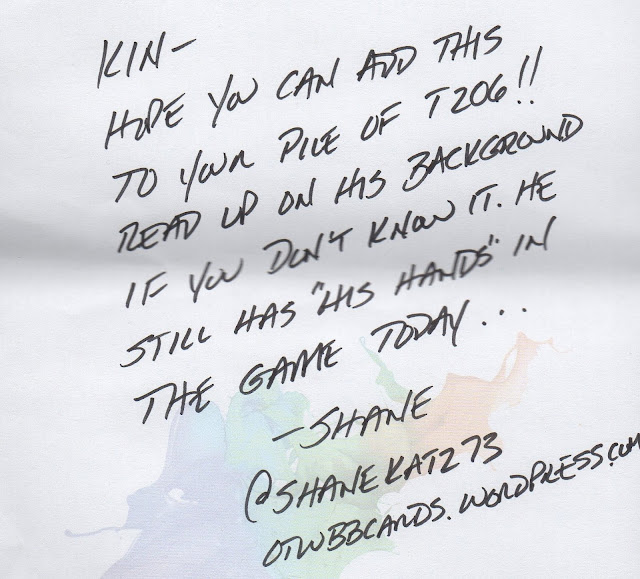 It's not every day that I get a T206 card in the mail!  I recall Shane emailed or messaged me a few weeks ago asking if I was collecting T206 cards.  I told him that I wasn't "working on the set," but I was picking up cheap cards from the monster when I came into them.  I didn't think anything more into it.

Something else I loved was the note to read up on the player's background.  Last weekend I ordered "The T206 Collection: The Players & Their Stories," a book that give brief biographies on all players pictured on the 520 cards in the T206 set.  This is a great chance to use the book for the first time other than my cursory glance the day it arrived.

As I type this, I haven't done the research yet.  Since "his hands" was in quotes, I'm guessing it has something to do with fielding gloves.  I believe that time frame is too early for batting gloves.  We shall see after the picture.

Welp, my guess was incorrect.  According to the book: "Russell "Lena" Blackburne is known more for his Lena Blackburne Rubbing Mud than for his days as a player, coach and manager.  Prior to 1938, the options for dulling the shine on baseballs were dirt from the playing field or tobacco juice.  Blackburne found that the muck from a special mud hole near the Delaware River worked without staining the ball.  The location is still a secret, but Blackburne started a pretty good business; the mud is still used by major league baseball.  A below average player, he played off and on in the minors through 1932 around his MLB tours, putting together a .283 batting average in 5,736 at-bats in 14 minor league seasons.  He played in the Eastern League for the Providence Grays in 1909, as pictured on his T206 card.  He also managed and coached with various minor and major league teams, including the White Sox, the A's, and the Toronto Maple Leafs in the International League, and the Lancaster Red Roses in the Interstate League."

WOW!  Thanks for both the card and the lesson in baseball history, Shane!  It is truly appreciated and I'm thrilled to add this card to my small stack of T206s.  This is the 16th T206 in my collection and my first PSA graded copy.

Email ThisBlogThis!Share to TwitterShare to FacebookShare to Pinterest
Labels: Off The Wall, pre war, T206