A Card of a Classmate I Caught

Another COMC order arrived yesterday so I have some posts to mix in with the card challenge posts.  For me, this card deserves it's own post.

A few weeks ago I decided that I want to put together a binder of former West Virginia University athletes.  It was inspired by Tony at Wrigley Roster Jenga and his Cubs and Blackhawks collections.

I picked this card up not because I didn't have one, but because I needed another.  The first was already in a different collection.

David and I played on the same baseball team in second and third grade, even though we went to different schools.  Our team was pretty good.  If I remember correctly, we were 25-1 over those two seasons.  In third grade, I was the team's catcher and shocking as this seems, he was one of the pitchers.  I don't remember too much in particular but the one thing I've always remembered was a game where we had a one-run lead and he came in to pitch the last inning.  Nine pitches, nine strikes.  The reason I remember is because my palm after that inning was beet red.

After the season I began playing at a different park across town so that I could move into the next level league.  I was a decent player but I don't believe I ever got a hit off him.  We later played on the same school football team.

He played the 2001 season at WVU and was drafted in the 17th round of that year's draft.  He played pro ball for eight seasons and had nine cards.  I have eight of them. 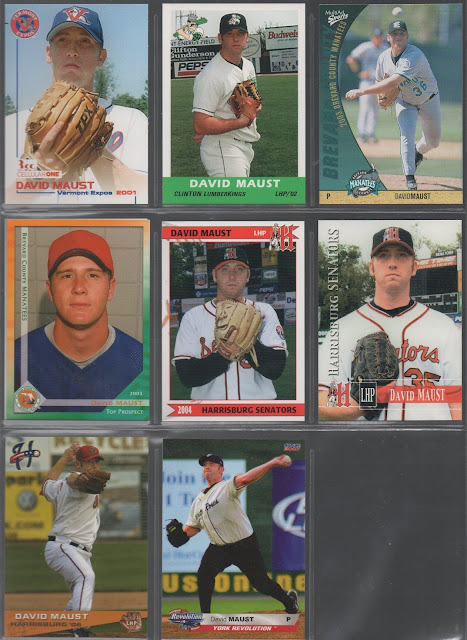 If anyone has a spare copy of his 2005 Choice Potomac Nationals card laying around, I'm your guy.  I'd love to finish off the run of cards!

I didn't play high school ball or anything, but I can always say that I caught a guy that played pro ball.  Dave is a good dude and it couldn't have happened to a better guy!
Posted by Kin at 12:05 AM