The eBay saved search emails are great.  I wish they'd come shortly after something is listed since I've lost a few items before I even saw them.  I will take what I can get though.  Last Friday one came through and I was afraid it was already gone.  It wasn't and I was concerned even in the time to go through and use ebates it could get bought out from under me.  Thankfully it wasn't.

Through one eBay purchase, I was able to double my number of cards from the 1911 American Tobacco Auto Drivers (aka T36) set.  Only one was a duplicate front, but it was a different back.  Also, I was able to pick this up at a price I am still thrilled about.  I didn't pay much more than the graded Ralph DePalma that I have. 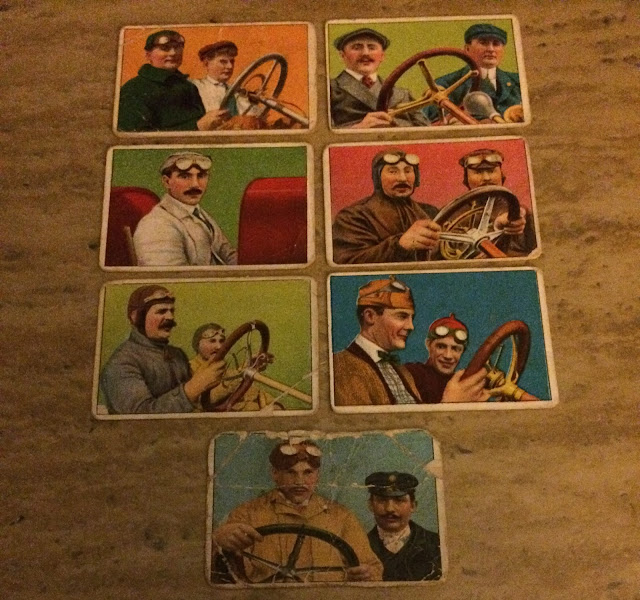 What I found interesting is that all of these are Mecca backs.  The seller has one Hassan back that he listed separately (and I did not buy it).  He did tell me these all came from one collection that he purchased.  Very curious.

Does that last name sound familiar?  The answer to your question is yes.  Louis Chevrolet co-founded the Chevrolet Motor Company just months after this card was produced.  He later ran in the Indianapolis 500 four times with a best finish of seventh in the 1919 race.

Arthur Duray raced in the Indianapolis 500 once, finishing second in 1914.  He's probably best known for breaking the land speed record on three different occasions.
Looking through Wikipedia (always there, sometimes accurate), I believe this is Harry Fletcher Grant, despite the "E." initial on the card.  This Wikipedia entry does list him as winning the sixth Vanderbilt Cup race and that matches an article from vanderbiltcupraces.com.  Grant competed four times in the Indianapolis 500 with a best finish of seventh in 1914.

The Fred Marriott Wikipedia page doesn't have much more info than can be found on the card back.  No Indianapolis 500.  BOOOOOOOOOOOOOOOOOOOOOOOOOOOO!!!
The interwebz has informed me that this card is of Harry MITCHENER, not Mitchner.  He has no Wikipedia page.  What I was able to find is that he won a 24-hour race at Point Breeze, PA with co-driver Ralph Mulford.

After this pickup, my base set stands at 11/25 cards.  My master set, with all back variations, is at 14/100.  You can see all of my cards from the set on my Collector Focus page.

If you shop online and haven't signed up and used ebates yet, you're missing out.  I also use it on eBay to get money back.  FREE CARDS!  If you're on Twitter, please give me a follow.  Happy collecting!