The ability to tie a mail day and a 30 Day Challenge post together makes me pretty dang happy! Today's card is one "that you spent more than $10 to get." 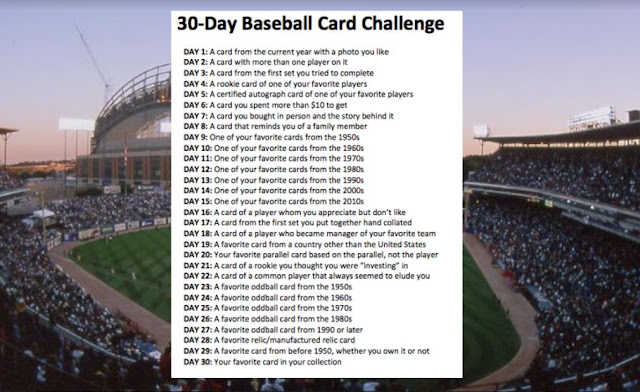 I wanted to pick up this card because a player that played at my alma mater (West Virginia) is on it.  Charlie Hickman was the third former Mountaineer to make the majors, debuting on September 8, 1897.  He played in 1,081 games (per Baseball Almanac) through the 1908 season.  He died in my hometown and is buried in a cemetery that multiple family members are resting in.

I searched eBay a few weeks back and looking at the options, I figured it would be awhile.  Much to my surprise, I saw someone selling the card on Net54.  It's PSA graded but low grade, which placed it into my comfort zone.  I paid more than $10 for it, but not much more.  I got it for about the price of a tank of gasoline.

From Beckett.com:  "The cards in this 50-card set measure approximately 2 1/4" by 4 11/16". The 1911 Mecca Double Folder issue contains unnumbered cards. This issue was one of the first to list statistics of players portrayed on the cards. Each card portrays two players, one when the card is folded, another when the card is unfolded. The card of Dougherty and Lord is considered scarce."