I went to a card show yesterday.  I bought cards.  A lot of cards.  Most of the cards were not for me.

There are a lot of shows in my area, but this show is my favorite one.  Life has been busy and the last time I was there was when I was a guest on a special Beckett Radio episode.  That was in the late summer or early fall.  (NOTE:  since I wanted to link the episode, I was able to find out that it was in September.  I didn't want anyone to think I'm that dumb.)


I had a lot of cards in mind that I wanted to look for.  There are a lot of hockey super collectors on Sports Card Forum and I've gotten lists of their needs.  I hope to some day be able to help them out.  Yesterday wasn't the day, however.

I bought, well, a metric crap-ton of cards from dime boxes.  I also bought a lot of dollar cards.  Some of those are mine, but most are either to put into my SCF inventory to trade, or to pass onto other bloggers.  I've enjoyed reading what others collect.  I love that most of the bloggers are the "real" collectors and not ones just trying to find the latest high priced shiny object.

So, on to my PC acquistions.

It wasn't but two tables in and I was digging into boxes.  I found these and got really excited!  I have a friend that was working on this "Miracle on Ice" autographed set.  I messaged him to see if he still was, he said yes so I bought them.  I love helping others. 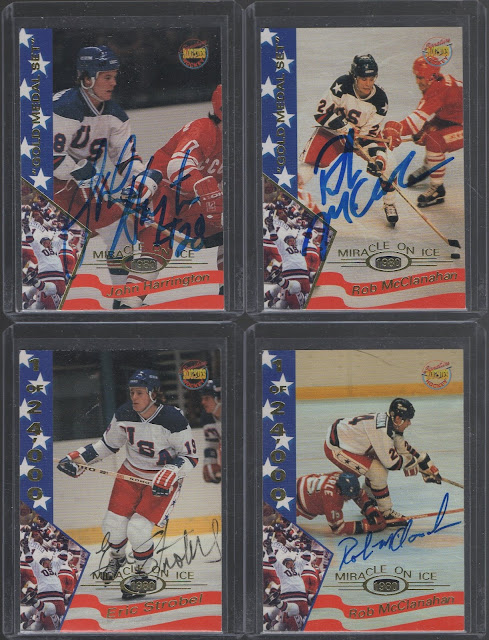 Fast forward to after I got home...and it wasn't good.  I didn't know much about this set so I did some quick research, only to find that these aren't the certified autos.  Those are numbered to 2000 and these are not.  Boo!  Upon closer examination, I'm going to guess they aren't legit at all.  If you look at the two cards on the right, they are the same player and those signatures aren't even close to looking the same.  I guess it's true that no good deed goes unpunished.  Alas, the sun still came up this morning.

The second table I stopped at was the gentlemen that has almost nothing other than hockey.  You might question why someone in Texas would be THAT into hockey that he doesn't delve into into anything else.  He grew up in Ontario.  That explains it.  I picked up a bunch of cards from his new dollar box.  They were all solid deals at that price and will be entered into my SCF inventory, as time allows. so that I can trade them.

I snagged five cards not from dollar boxes.

I hate that the Blackhawks traded Brandon Saad away.  He was my "other" favorite Blackhawk, after Andrew Shaw.  He grew up outside Pittsburgh and since I can't stand that city (I lived there for two years), I took joy in the fact that he was not a Penguin.  It makes me saad that he's in Columbus, but I'm happy that he's playing well.

With Saad gone, Scott Darling became my new "other" favorite Blackhawk.  With Shaw now skating for Montreal, he's now moved into the number one spot on my top eight.  Sadly, I will have to pick a new favorite again next season.  It's not likely Darling will be wearing a Chicago sweater next season.  I hate it for him, since he's a Chicago kid.  At least he has had a nice run.

I never saw Darren Pang play but he will always be synonymous with the Blackhawks to me.  Everyone gather around in a circle and I will explain why.  I am often insulted as being a bandwagon fan because I'm a Hawks fan.  Well...not so fast, my friend!  How does a kid growing up in Morgantown, West Virginia become a Hawks fan?  Radio.

When I was in seventh grade my parents gave me a stereo as my big gift for Christmas.  That stereo had one hell of an internal antenna.  Depending on time of the day, I could get sports radio stations out of Cleveland (why I was an Indians and Cavs fan as a teen), New York, sometimes KMOX from St. Louis, Atlanta, Toronto and I could get WMVP out of Chicago after 8 or so in the evenings.

I took to the Hawks and spent many nights listening to Pat Foley call games, long after my bed time.  Darren Pang was the studio host.  Those two are some of the voices of my youth and reasons I wanted to go into sports radio.  I do have a TV & Radio Broadcasting degree from West Virginia University, but life didn't turn out that way (and I'm more than fine with it).  He may work with the St Louis blues now, but Panger will always be a Blackhawk to me.

I did pick up two other cards, but I am going to save those until later.  I also bought a set of 90210 cards as a "gag" gift for the wifey.  I figured she'd chuckle at them and say thank you.  We've been watching A LOT of that show on Hulu over the last couple of months.  By watch, I mean that I've been in the laptop a lot.  She really took to the cards though and loved looking through them.  It was money well spent to see her smile and laugh!

I hit up a third table where I spent more than an hour looking through some solid dime and dollar boxes.  There's nothing from that purchase that I'm going to show in this post, but I will soon be starting "Dime Box Buy of the Day" posts soon.  I thought of the idea going through these boxes.

There was one more table that I rummaged through and picked up hundreds of cards from dime boxes.  Those will be slowly posted over time.  I did pick up some cards for 50 cents and I'm thrilled with them.

The Doak Walker is VERY well loved, but it's a Hall-of-Famer card that is #1 in a pretty popular vintage set.  I wasn't passing this up for 50 cents.  I believe I have a copy of this already, but I look at it as "preserving history."

I will smile and fondly remember the innocence of my teens every time I see this card.  I was a teen in the 1990s, but was attempting to put the 1971 Topps set together.  I have always loved the design.  Eventually college hit and at some point I'm sure that I needed money and sold off the cards that I had.  This was one of them.  It just hit me that two of these cards were #1 in vintage sets.

That was about the end of my card show pickups for the day, though I did go to a shop after the show.  Circling back to earlier, my two "big" pickups of the day were hockey cards.  The first one I will show you almost didn't come home with me.


I'd already made my purchase from this table, but I circled back around and he told me that he'd put a Stan Mikita stick card into one of the boxes after I left and I didn't pass it up.  He knows I'm a Blackhawks fan and I picked up Beehive photos of Mikita and Glenn Hall in the past.  Those have since been graded and encapsulated by BGS.

I love stick cards.  Perhaps it's just me, but I'm tired of boring ol' one-color sweater cards.  Give me more memorabilia and let's mix it up a bit!

Speaking of Glenn Hall...this was my big pickup of the day!

This isn't something I had any real need to pick up, but when I saw it, I wasn't passing.  I will probably never have a copy of his $400 rookie, but now I do have his second-year card!  The centering is off but it's in pretty good condition for an almost 60-year old card.

As I was about to leave the show, I was chatting with Rich (the promoter) and a couple of collecting friends.  I looked over and something caught my eye.  When I first walked in the seller at the front had a bunch of 80s factory sets for $3.  Yes, $3.  I just don't have much spare room or I would have probably bought every last one of them at that price.  They were gone but he's told me earlier that he had a few more below the table if I was interested.  I declined and moved on.

At the end though, these caught my eye and I made them mine for $3 each. 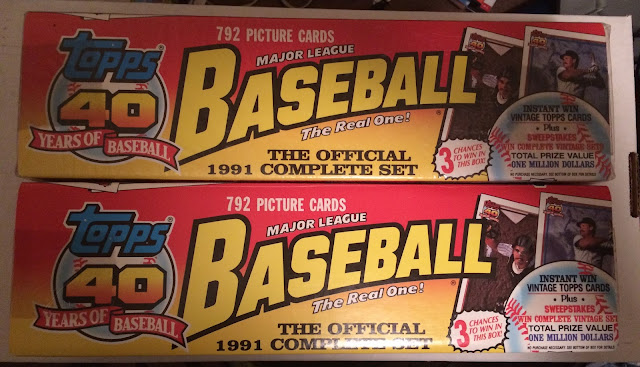 I opened one of them up, pulled out about 20 or so and...all glow backs.   It will still be awhile before I start on this project but I am thrilled that I could add these to the three vending boxes that I already have.

I feel like a collector again, and it's so much fun!
Posted by Kin at 7:59 AM