This item from the box o' cards is the item that I'm most glad was saved.  It's the one that would be the toughest to replace and probably the most expensive. 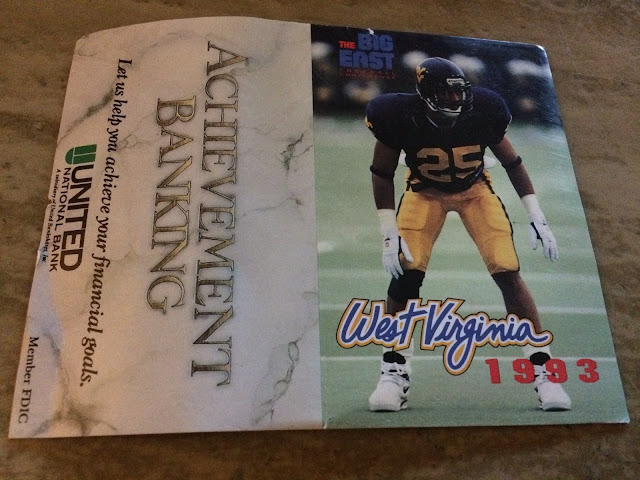 It's not in perfect shape, but I'm thrilled to have a copy of this 1993 schedule.  The team went 11-0 during the regular season, winning the Big East title.  Unfortunately, they couldn't complete the perfect season and lost 41-7 in the Sugar Bowl.

A couple of players on the team went on to long NFL careers.  Todd Sauerbrun punted in the league for 13 seasons, playing in three pro bowls.  Aaron Beasley played nine seasons, registering 24 interceptions and two touchdowns.  Rich Braham played 13 seasons with the Cincinnati Bengals, starting 142 games.  Canute Curtis was a consensus All-American and Big East Defensive Player of the Year in 1996.  He ended his Mountaineer career the program leader in sacks (33.5) and went on to play six seasons in the NFL.  Mike Logan played ten seasons in the NFL and was a member of his hometown Pittsburgh Steelers when the won Super Bowl XL.  John Browning played 11 seasons with the Kansas City Chiefs, tallying 27.5 career sacks.

Defensive back Mike Collins is the man on the schedule.  He's one of the many players from the 1993 team remembered fondly by WVU fans.  Some of the other players on the team were Vann Washington, David Mayfield, Jake Kelchner, Mike Baker, Darren Studstill, Jay Kearney, Zach Abraham and Lovett Purnell.  Fortunately for Mountaineer fans that are also collectors, a handful of these players ended up on trading cards. 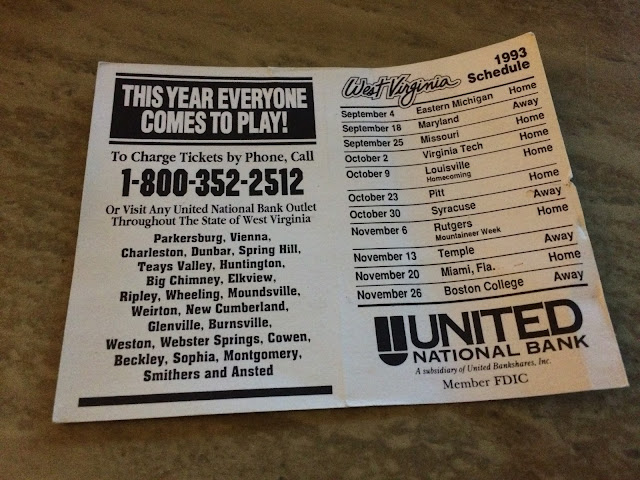 
If you're on Twitter, please give me a follow.  You can also find me on Trading Card Database.  I love trading cards, when it makes sense.  Happy collecting!
Posted by Kin at 12:17 PM