Why I Collect - Russ Davis

A few days ago I posted a couple of Russ Davis cards that I picked up from Sportlots.  Matt, of Bob Walk the Plank fame, mentioned that he must have missed why I collect Davis. 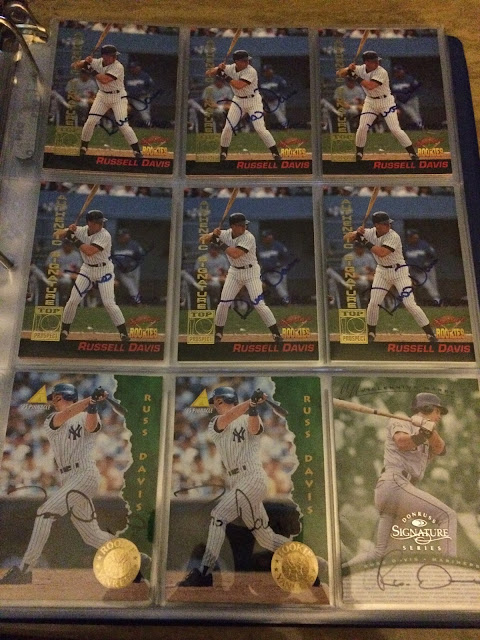 It got me to thinking, that could be a series of posts.  So many people out there collect players like Mike Trout, Connor McDavid, Bryce Harper and any other number of the same players.  Aaron Judge is the latest one that so many collect and it just bores me to tears.  It's so unoriginal.  Over time, some of the names I've collected are Andrew Shaw, Russ Davis, Darrell Whitmore, Steve Kline, Chris Enochs, Bob Sura and Jedd Gyorko.  The only name that's been a superstar was Jeremy Roenick, who is now in the Hockey Hall of Fame.

There are reasons we all collect and many of us aren't just "collecting" to invest.  Some don't understand that.

For me this is one of the things wrong with the hobby.  There's nothing that I can do about it, so I just move on.

I was visiting my family in Alabama one summer (I would guess 1993 or 1994) and my uncle told me about a kid from the next community over that was a top prospect in the Yankees system.  There was nobody from my hometown to collect and even if there was, it would have been expensive to collect a local player.  So, I started collecting Hueytown, Alabama's Russ Davis.

As most know,  collecting in the mid-1990s was different.  Card shops and shows were really the only place to get singles.  There was no internet and eBay.  Early on, I was just going to all sellers at shows and asking what they had.  Davis was enough of a prospect that he had cards and dealers knew who he was.  He wasn't a top-five prospect in baseball, so I was able to get his cards cheaply in bulk.  I don't believe I ever had to pay a buck or more for a card since we didn't have low-numbered, autographs and memorabilia cards.  It was a good time.

There was a husband and wife dealer in my area that opened a lot of cards.  The lady took a liking to me and any time they pulled a Davis card, she set it aside for me.  If I didn't see them for a few months, she might have 50 or so of them for me.

One card that I had trouble coming by, though it should have been easy to get, was the 1995 Score Air Mail card.  The reason was that the insert was available ONLY in Series 2 jumbo packs.  Anyone collecting then knows that you couldn't walk into any store and get a jumbo pack.  I remember being on a family vacation and found a place selling them.  I bought as many as I could.  No Davis card.  It wasn't until I was on eBay in the late 1990s that I picked that card up.

There aren't too many pre-1997 Davis cards that I need.  The ones I do need are minor league or tougher parallels that weren't easy to find at card shows.  I started at West Virginia University in the fall of 1997.  I still collected a bit, but there were other things paramount in life.  His last cards were from 2002 releases and I wasn't very heavily back into the hobby at that point.  Even if I had been, I wasn't very interested in baseball by then.  My sports focus had shifted to football.

I'm working to finish off the collection as best I can.   There are a few 1/1s and low-numbered cards that at this point, I likely won't come into.  All I can do is get as close as I can and recount some of the fond memories of collecting cards as a kid.

If you shop online and haven't signed up and used ebates yet, you're missing out.  I also use it on eBay to get money back from purchases there.  Between referrals and cash back, I've gotten over $100 in about seven months.  FREE CARDS!  If you're on Twitter, please give me a follow.  Happy collecting!
Posted by Kin at 12:40 PM

Email ThisBlogThis!Share to TwitterShare to FacebookShare to Pinterest
Labels: Russ Davis, Why I Collect