TTM Success #41 - What Happened When

My latest TTM return was sitting on the table waiting for me when I came home from work on Thursday.  This one isn't from a former player.  He's the man behind one of the podcasts that I depend on to get me through my work week.

I'm mentioned a podcast and shown you that it came from Atlanta.  I've mentioned that he's not a former player.  Any guesses?

Wrestling is one of the few things that my dad and I bonded over when I was young.  I was all sports, all the time and he wasn't much into them.  He did love pro wrestling and I took to it as well.  During those teenage years that many stopped collecting I never did.  However, I lost interest in pro wrestling.

In college I became interested again and all the names that I knew weren't in WWF.  They were in WCW and that's where my viewing interest leaned.  The voice of WCW television was Tony Schiavone. 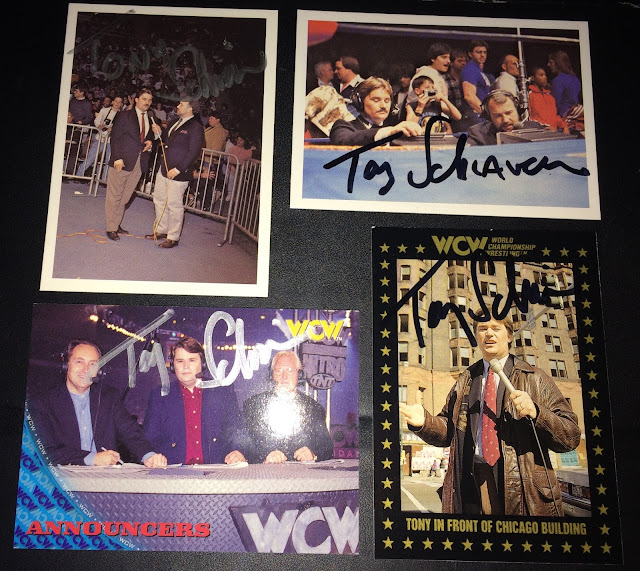 After the WWE purchase of WCW, Schiavone left the wrestling scene but remained in the media.  He is play-by-play radio voice of the Gwinett Braves and that's where I sent these to.

Thankfully for us wrestling fans, he now records a weekly podcast called "What Happened When" where he discusses his time in pro wrestling.  You can also find it on iTunes.  It started in February and the next episode will be number 30.

The upcoming episode is probably the one I've most looked forward to so far.  I have loved Tony's stories about "The Enforcer" Arn Anderson so far throughout the series.  On Monday we will get more than two hours of Enforcer talk and I can't wait!

Thank you for signing, Mr. Schiavone!  It didn't go unnoticed to me that you used different color sharpies that allow the signatures to better show up!

Now if you'll excuse me, I'm going over to Pro Wrestling Tees to pick up my "Damn I Am Good" WHW tee.  Can't wait to get my phone call from Schiavone for ordering!