On an earlier post, I showed the Stephen Johns Gold Foil Rainbow Young Guns.  There were other Young Guns in the shipment. 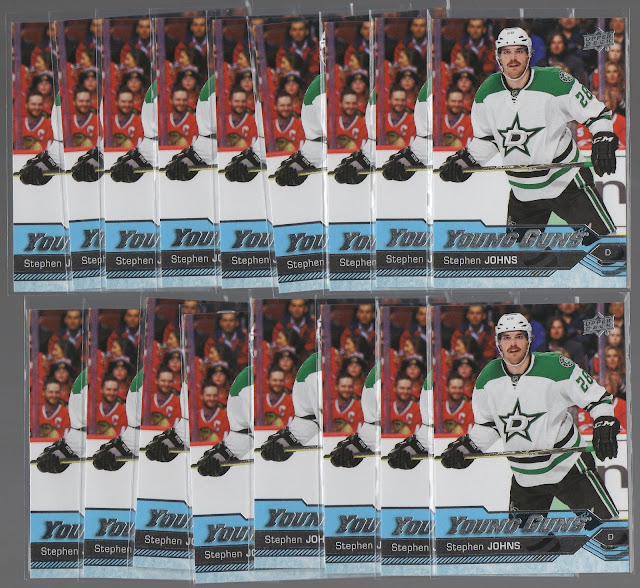 Yes, I picked up this many Stephen Johns Young Guns.  As cheaply as they can be had on COMC, I can (hopefully) sell them at shows and make a few bucks.

On the Upper Deck ePack site, I got a hard-to-find, and desirable, card.  I sent everyone that had a Johns Exclusives an offer for it and one trader took it!

This was a card that I "made" by combining five Young Guns cards.  Most of the silvers I combined into golds, but I needed one copy of this.
Jesse Puljujarvi is a card that was very desirable on ePack, but I didn't feel people were offering enough to get from me.  So, I elected to send him home.
If you're not going to get an Auston Matthews, Patrik Laine is probably the card you want to pull.  There was no reason for me to attempt trading this on ePack, because I didn't want to trade down.  I already had two Auston Matthews Young Guns, so I didn't need to trade up.

If you shop online and haven't signed up and used ebates yet, you're missing out.  I also use it on eBay to get money back.  Between referrals and cash back, I've gotten over $100 in about seven months.  FREE CARDS!  If you're on Twitter, please give me a follow.  Happy collecting!
Posted by Kin at 12:07 AM