To be honest, I wasn't the biggest fan of what ePack was during the 2015-16 hockey card year.  They GREATLY improved things this year, with the gold rainbow foils.

Last season's silver foil boards can be had for just a few cents on COMC and there are hundreds of them just sitting there that may never leave that facility.  The creation of the gold parallel hasn't raised the "value" of the silvers, but it has decreased the supply.  I searched John Klingberg's silver versions from the last two seasons.  There are 490 copies of the 2015-16 version on the site with a lowest asking price of six cents.  You can get the 2016-17 version for five cents, but there are "only" 141 copies of it available.  There are 11 of the gold versions available.  If the gold wasn't an option, it would likely close to double the amount of silvers available.

My hope is that next year Upper Deck will make a third level, as they have with their Compendium set.  You can combine base to make blue, red and gold versions.  It's possible that there are players that have less than a handful of gold cards.  People are quick to get blue versions (that only require ten base cards) and flip them to COMC.  Every one of those creates ten less cards that can be combined for red and golds, unfortunately.

The scans don't show how beautiful the gold foils really are.  I decided to take a picture of one under light to get you a better idea.  It still doesn't do them justice, but it's a bit better than the scans. 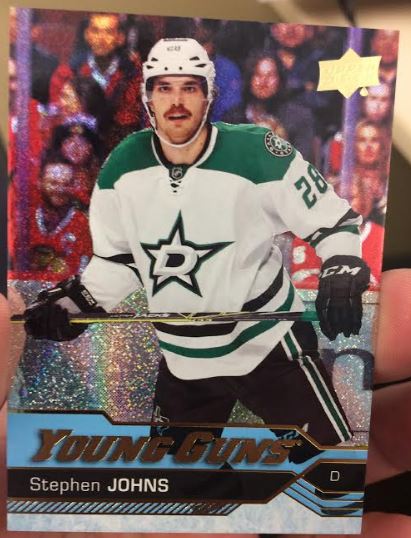 One of my common complaints about modern sports cards is how every photo is pretty much the same.  I give Upper Deck a lot of credit for using shots that aren't your run-of-the-photos more than the other companies.


I will probably only keep the Andrew Shaw and Stephen Johns cards.  The rest I'm going to put into the box for the next time I set up at a card show.  Well, maybe I only keep two of the three Johns that I have.

If you shop online and haven't signed up and used ebates yet, you're missing out.  I also use it on eBay to get money back.  Between referrals and cash back, I've gotten over $100 in about seven months.  FREE CARDS!  If you're on Twitter, please give me a follow.  Happy collecting!
Posted by Kin at 12:05 AM