Two Card Shows, a Podcast and a Card

Today was a full day.  I hit up two card shows and made it home in time to see most of today's Indianapolis 500 qualifications.  It was a good day and I only bought one card.

I started out the day at the Beckett Media Card Show.  It was one of the FOUR card shows in the Fort Worth/Dallas area today.  I didn't count, but there were probably ten sellers, none of which I'd ever seen at any of our local shows.  I'm not complaining, as that means new product.  All the local shows are great, but it's the same sellers and same product in general.

The Beckett show was centered around on-site authentication from Beckett Authentication and on-site Beckett Grading service.  I met Marlin, who drove down from Kansas City to take advantage of the on-site services.  I've conversed with him online and he's also in the same Beckett Fantasy Baseball League that I'm in.  If you don't follow him on Twitter, click on his name above and give him a follow.  Marlin gave me a gift as a thank you for being the only team that he's beaten this season.

I sat down with Eric from Beckett radio and did an almost 30-minute segment with him.  We chatted about wrestling, ePack, collectors that complain about every and some other random topics.  It wasn't my first (or second) time on the show and I hope that it won't be my last.  The link is below for you to listen in.  You also should follow them on iTunes and listen to the weekly show, if I do say so myself.

I only made one purchase at the show and it wasn't a card.  I picked up the latest Beckett Vintage Collector.  It's my favorite magazine in the Beckett family.  There is some pricing in the magazine, but it's much heavier on articles, which I like.  I've learned about many sets that I knew little about since the first issue. 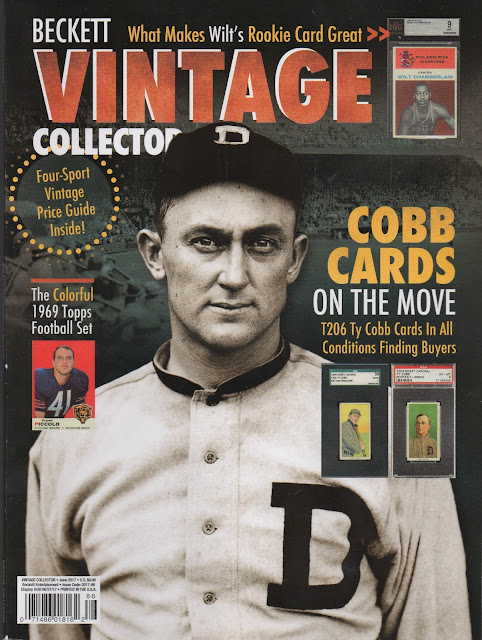 I stayed at the show MUCH later than I wanted to.  When I got to my car I took a look and found that Indianapolis 500 qualifications weren't going to begin (due to weather in Indianapolis) until 3 p.m.  I decided to stop off at the weekly card show at Duane's Sports Cards on the way back since it's close to home, and Roger Neufeldt was set up and selling.  I only picked myself up one card.  It wasn't from Roger, or vintage.  I paid only a buck for it, but I was thrilled to find it.  It's the kind of card that if it's on COMC, some douche canoe is going to want $25 for it.

I opened a bit of this product in 1995 and never got any of the golds.  I have one now!

If you're local, I recommend that you give this show a try, or a second one.  They've moved some things around and there is certainly from fresh product there and it looks a lot more full.  I know that I need to go back soon and start digging to work on others' want lists.  I may or may not have picked up a few cards today for others, but you'll never know.

If you shop online and haven't signed up and used ebates yet, you're missing out.  I also use it on eBay to get money back.  Between referrals and cash back, I've gotten over $100 in about six months.  FREE CARDS!  If you're on Twitter, please give me a follow.  Happy collecting!