Russ Davis cards from The Angels In Order

I definitely need to get back on the Russ Davis project.  I need to catalog what I have and create a want list of the ones I still need.

There are a couple of complications that frustrated me the last time that I worked on it.  For one, sometimes his first name is listed as "Russell" and other times as "Russ" in the Sports Card Forum inventory manager.  Also, on some of the early 1990s minor league sets, I can't tell if team sets and the sets that were released nationally are the same cards, based on looking at inventory on COMC and Sportlots.

I got frustrated and took a break.

This week I received an envelope from Tom of The Angels, In Order that contained some Davis cards!  WOOHOO! 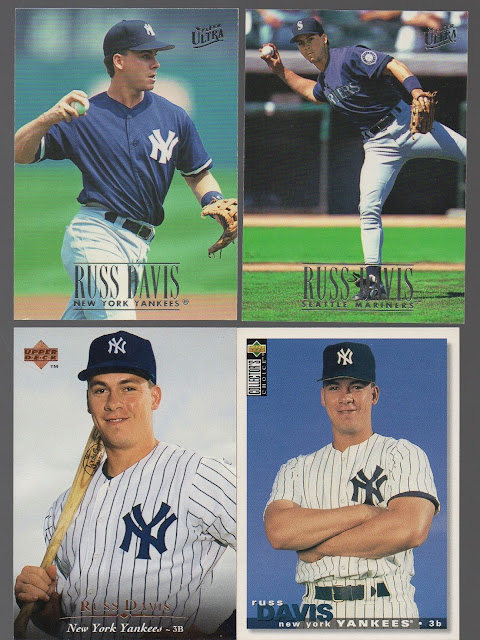 I have to say, that Upper Deck set is one of my favorite designs ever.  It's too bad for Davis about those rosy cheeks in the picture!

Thank you, Tom.  Just so you know, I have another stack of cards to get out to you.  When I ship my next batch, they will be on the way.  I promise!

If you shop online and haven't signed up and used ebates yet, you're missing out.  I also use it on eBay to get money back.  Between referrals and cash back, I've gotten over $100 in about six months.  FREE CARDS!  If you're on Twitter, please give me a follow.  Happy collecting!
Posted by Kin at 5:56 PM