Less than a week ago, Adam of ARPSmith's Sportscard Obsession posted that he needed some sorting space and would send team lots to collectors that claimed a particular team.  There are no strings attached, but of course I will send him some cards back.  The only problem is that he sent WAY more than I ever expected and I'm going to need to pick up some cards for him!

I got back to my desk yesterday after a couple of meetings and there was a HEAVY priority mail box on my desk.  I had no idea what it was, even after looking at the address.  As soon as I pulled the first team bag out, I realized what all was in the box.  WOW! 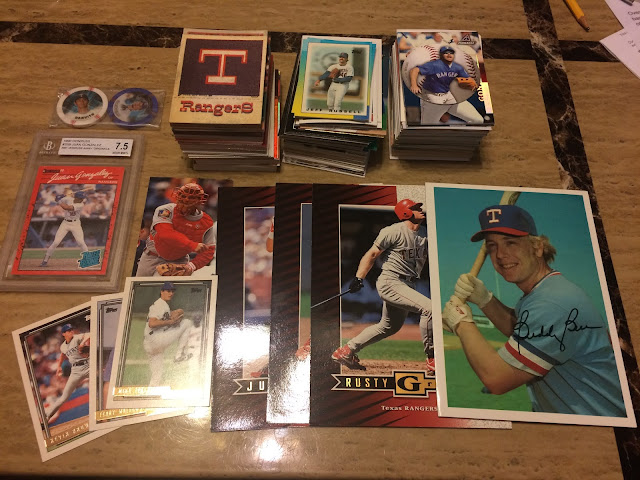 That pic doesn't do the cards justice.  Here's another pic that shows how tall the stacks are. 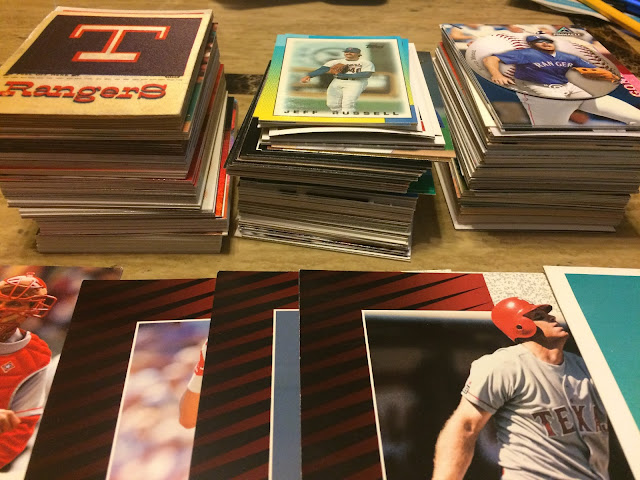 The cards range from the late 1970s through last season.  Just about every notable Ranger of the last 30 years was in there.  Some of the names were Nolan Ryan, Alex Rodriguez, Ivan Rodriguez, Mark Texiera, Will Clark, Cole Hamels and Yu Darvish.  Not all the cards were mainstream, there were plenty of oddballs in there.  I had no idea what to expect, but I definitely didn't expect this!

I will have a first package out for you soon, Adam.  Then, I will have to find some more things and get out a second one.  I might not be at a card show for a few months, though.  Thank you!


If you're on Twitter, please give me a follow.  You can also find me on Trading Card Database.  I love trading cards, when it makes sense.  Happy collecting!
Posted by Kin at 5:30 PM