As much as I can, I'd like to keep the OCAAT posts relevant with current happenings.  As many of you may know, "Mean" Gene Okerlund passed away on January 2.  As a guy that always loved GOOD announcers, and went to school for TV & Radio Broadcasting, Okerlund was one of the voices of my youth.  He was an icon to all who watched wrestling in the 1980s and 1990s.

Almost two years ago, I was fortunate enough to receive back a TTM request I had sent out to Okerlund.  I was much more active sending then and more than a handful of the men that I sent to during that time have passed away.  One of them, one of Okerlund's best friends, Bobby Heenan.  This is about Mean Gene, though.


Because of how the wrestling industry has changed, there will never be anyone that can hold a candle to Gene Okerlund.  There just won't be the opportunity.  Even if there was, Okerlund would be the best, ever.

Okerlund was 76 years young.  Per Wikipedia (always there, sometimes accurate), his son has stated that he recieved three kidney transplants and suffered a fall that caused his health to deteriorate in his final weeks.

He is survived by his wife, two children and three grandchildren. 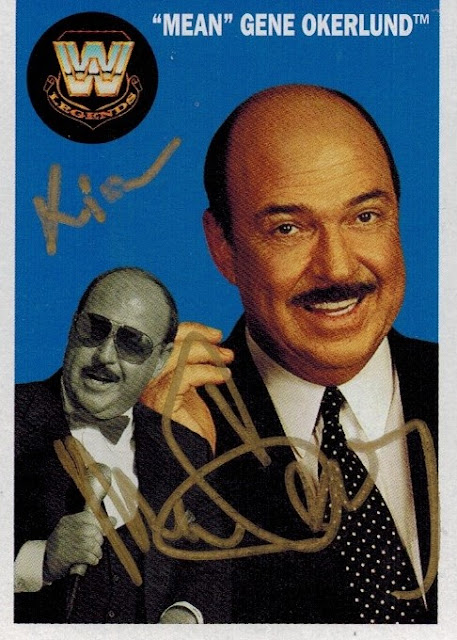 Thanks for the memories, Mean Gene.
Posted by Kin at 6:19 PM